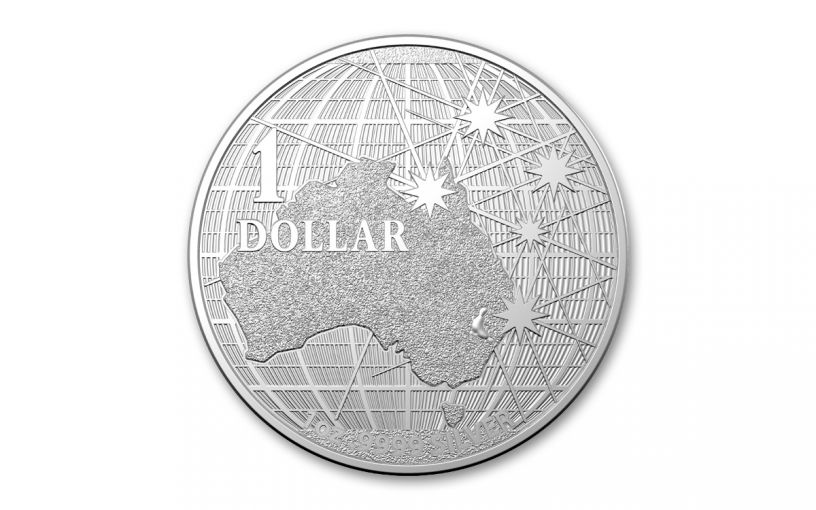 Availability: In Stock
This item will ship within 2 business days.
Item #
410146

In 2018, the coin world mourned the passing of the great Stuart Devlin, the Australian-born designer who had left an indelible mark in the field of numismatics both in his home country and around the world. But while gone, his designs continued to inspire a new generation of artists. To pay tribute to the life of this great man, The Royal Australian Mint searched through its archives and found an original draft Devlin had completed 50 years earlier that was never used on a coin. Now retrieved and revised, the design is featured on a new gold and silver bullion coin series — and 2021 marks the second year of the series!

Entitled as “Beneath the Southern Skies,” coins, the fantastic $1 legal-tender coin available here was struck in a full ounce of 99.99% pure silver. It depicts the Australian continent alongside the Southern Cross constellation. To differentiate it from other coins in the series, the 2021-dated release features a tiny platypus struck into the Australian continent where the city of Deakin appears on the map. Deakin is home to the Royal Australian Mint in southeast Australia about 185 miles south of Sydney.

While those of us in the northern hemisphere are unable to view the Southern Cross constellation, it’s one of the most recognizable constellations of the southern hemisphere and one that has been used by travelers and explorers for centuries as a navigational guide. Named for its five brightest stars that, when viewed together, form a cross positioned north, the Southern Cross is recognized symbol of loyalty and has been an inspiration for poets and musicians across the world.

Stuart Devlin (1931-2018) was born in Geelong, Australia where he began a career in goldsmithing and silversmithing at the age of 17. In an illustrious career that spanned more than 70 years, he designed coins for Australia, the United Kingdom and more than 30 other countries. He rose to prominence in 1964 when he won a competition to design Australia’s first decimal coinage. Among his other famous works were Australia’s now-iconic “Red” kangaroo series and the coins and medals for the Sydney 2000 Olympic Coin Program. As if his skills weren’t obvious enough, they were honored once again in 1982 when he was appointed Goldsmith and Jeweler to Her Majesty Queen Elizabeth II.

Each coin available here comes in original Brilliant Uncirculated (BU) condition as fresh and crisp as the day it left the mint. Whether you’re a fan of Australian coins, Stuart Devlin or just like adding pure silver to your collection, this coin is for you. Add one — or several — to your cart today!