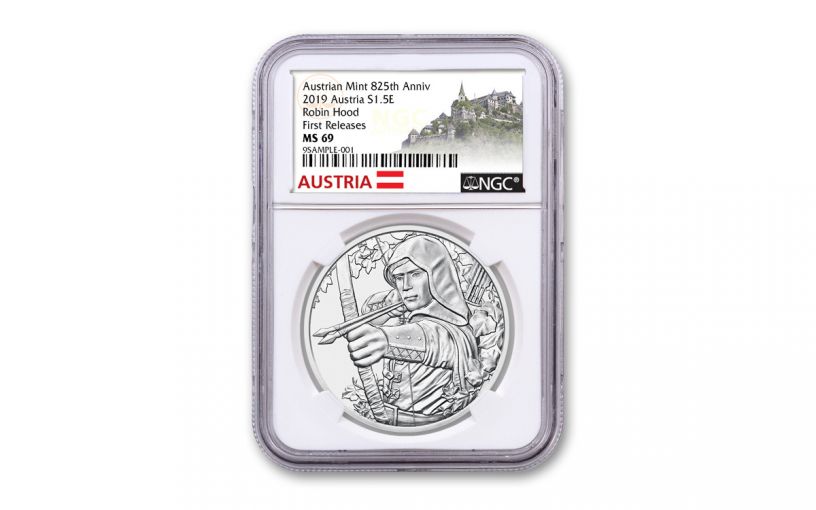 Availability: Out of Stock
This item is currently Out of Stock. Please sign up to be notified if this product becomes available.
Item #
354116
Add to Wish List Add to Wish List Wishlist is for registered customers. Please login or create an account to continue. Add to Compare

The Medieval Feud that Gave Birth to a Heroic Outlaw

The founding of the prestigious Austrian Mint in Vienna dates back to the 12th century and a royal feud between two crusaders. It started in 1191 when England’s Richard I snubbed Austria’s Duke Leopold V during the Third Crusade. A year later Leopold would have his revenge when he took Richard prisoner on his way back from the Crusades and released him in 1194 only after being paid 15 tonnes of silver. From that silver, Leopold began striking coins featuring his seal. It was the ultimate display of one-upmanship and represented the first coins of the Austrian Mint.

Now, on the 825th anniversary of Leopold getting the better of Richard, the Austrian Mint has released the final issue of a planned three-coin series that commemorates the founding of Austria’s Vienna Mint. Struck in one ounce of highly pure 99.9% silver, these legal-tender coins bring a close to the series with a design that pays tribute to Robin Hood, the legendary heroic outlaw who rose to defend England’s downtrodden against Richard’s unscrupulous Brother Prince John during the king’s captivity. The image shows the bandit king of Sherwood Forrest taking aim with his trusty longbow. Is he about to shoot one of the king’s deer, or does he have his sights set on a greedy merchant and his fat money bag? Whatever Robin’s intentions, the image is crackling with adventure!

Each coin available in this offer has been graded by the Numismatic Guaranty Corporation (NGC) as being in near-perfect Mint State-69 (MS69) condition, a distinction that means these almost-flawless coins will showcase impressive full strikes and indistinguishable imperfections – well above and beyond the quality of the vast majority of coins in the series. In addition, NGC has certified these 2019 Austria 825th Anniversary of Vienna Mint Robin Hood One-Ounce Silver Coins to be First Releases (FR) coins, a designation that means they were received by NGC or an NGC-approved depository within the first 30 days of their release. Each will come sonically sealed in an acrylic holder with a white display core.

Your One-Ounce Silver Robin Hood Coin is 1.5€ (1.5 Euros) legal tender and has a maximum worldwide limited edition of just 100,000. For coin collectors, students of history and silver stackers the world over, these coins are sure to be a right on target. Rediscover the adventures of Robin Hood and learn how his campaign to rob form the rich to give to the poor was triggered by a feud between England’s King Richard the Lion Hearted and Austria’s Duke Leopold – a feud which ultimately founded the world-famous Austria Mint where these coins were struck! Order your coin today!

Celebrate the founding of the Austrian Mint and the epic adventures of history’s most heroic outlaw with this 2019 Austria 825th Anniversary of Vienna Mint Robin Hood One-Ounce Silver Coin. Click one – or several – to your cart today!