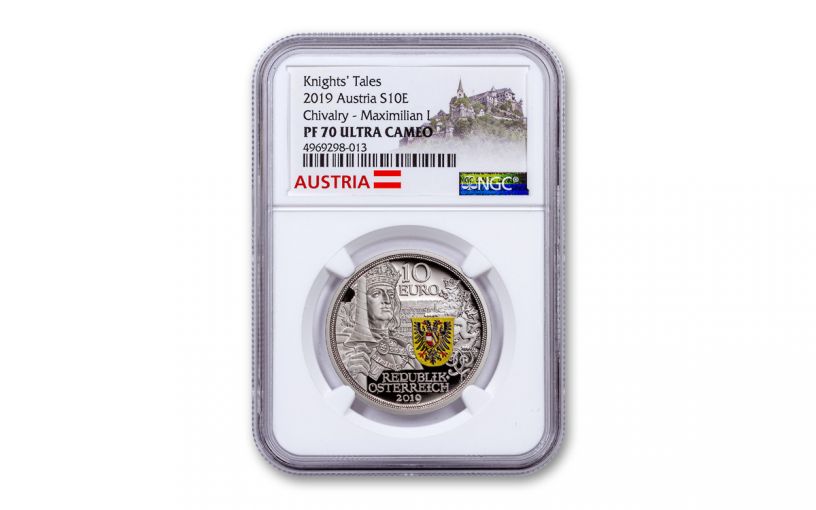 Availability: In Stock
This item will ship within 2 business days.
Item #
350320
Add to Wish List Add to Wish List Wishlist is for registered customers. Please login or create an account to continue. Add to Compare

Proof That Chivalry Is Not Dead!

The code of chivalry was one of the shining lights of honor and piety in an era stricken with merciless brutality and constant warfare. A knight’s code of honor was everything to him and helped give some sense of peace and civility in a period of history dubbed the “Medieval Age.” Struck in a half ounce of gleaming 92.5% Sterling silver, this 10 Euro legal-tender coin harkens back to this archaic age with amazing detail and an incredible story.

Struck by the Prestigious Austrian Mint, the coin’s reverse shows a knight on horseback competing in a jousting tournament, one of many competitions knights took part in to test their mettle and hone their skills. The obverse depicts Maximillian I; Archduke of Austria, Duke of Burgundy, Holy Roman Emperor, and Sovereign of the knightly Order of the Golden Fleece. The Order of the Golden Fleece was an extremely exclusive order of knights that never had more than 30 members to it and only consisted of the noble elite. Considered to be the best of the best, these knights lived their lives by the Code of Chivalry. To his subjects, Maximillian I exemplified all the values Chivalry. Next to Maximillian’s highly detailed image is his Coat of Arms rendered in full color and held by a heraldic lion.

Not only is this 2019 Austria Half-Ounce Silver Knight’s Tales – Chivalry Proof is the first release in Austria’s planned five-coin Knight’s Tales series, but each coin available in this offer has been graded by the Numismatic Guaranty Corporation (NGC) as being in flawless Proof-70 Ultra Cameo (PF70UC) condition, a distinction that means your perfectly-graded proof will have ZERO imperfections – showing all features and fields exactly as the engraver and mint intended. It will also come sonically sealed in an acrylic holder with an exclusive Austrian-themed label.

With a maximum worldwide edition limit of just 30,000 proofs, the time to secure yours is now! The gauntlet has been thrown down – accept the challenge and click one of these coins to your cart today!

Now you can have a living legend in your collection with the first of Austria’s Knight’s Tales series that are harkens back to the days of knights, fair maidens and chivalric adventure!