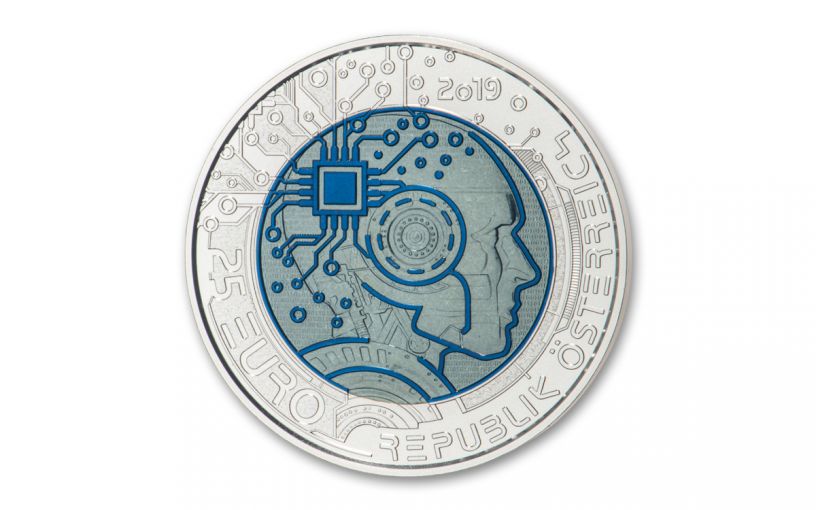 Availability: In Stock
This item will ship within 2 business days.
Item #
350959
Add to Wish List Add to Wish List Wishlist is for registered customers. Please login or create an account to continue. Add to Compare

The Robot Overlords Command You to Seek Out This Coin!

There are three hard and fast rules about robotics and Artificial Intelligence that were set in place by Isaac Asimov, one of the most prolific science fiction writers of all time. Those rules state that 1) A robot or A.I. may never harm a human being. 2) A robot must obey a human’s orders unless it is to harm another human. And 3) A robot must protect its own existence so long as such protection does not conflict with the first two laws. We’ve all seen the movies, though, and it seems like whenever robots gain too much intelligence, they end up overthrowing humanity. But since we’ve all seen what can happen, surely, we’re prepared to prevent it, right… right?

That’s the question posed by Austria’s otherworldly 2019 Artificial Intelligence Silver-Niobium Coin. Struck in gleaming 90% fine silver, this futuristic coin is beautifully complimented by the addition of a bi-metal silver-niobium insert. Niobium was discovered in 1801 and is used primarily in the aerospace industry and jewelry manufacturing. These coins have a striking appearance because the silver-niobium core has been oxidized to give it an electric-blue color. The effect is a stunning visual that elevates this release to a new level of high-tech coin wizardry.

On one side, the coin depicts a humanoid robotic head with a sci-fi theme that is fully realized with synapsis and a memory card in the niobium’s deep translucent blue color insert with conductor paths that extend to the outer silver ring. The coin’s reverse continues the theme with a bold silhouette of a human head – which is empty to symbolize our ignorance about the coming age of super-intelligent A.I. robots. Neural synapses spread from the outer ring into the niobium core where they meet a binary code.

Your 2019 Austria Silver-Niobium Artificial Intelligence Colorized Coin was struck by the Austrian Mint with a finish the mint describes as “Special Uncirculated” quality with a combination of satin and mildly reflective surfaces. The coins available in the offer will come in gorgeous Gem Brilliant Uncirculated (BU) condition, as fresh and sharp as the day they left the mint. Each also comes with its original government packaging from the mint.

These legal-tender €25 (25 Euros) coins have a maximum worldwide limited edition of just 65,000. Unfortunately for American collectors, there is a huge following of these coins in Europe where collectors eagerly await the annual release of the Austrian Mint’s Niobium Coin Series.

Physicist Stephen Hawking, Microsoft founder Bill Gates and SpaceX founder Elon Musk have all expressed fears about A.I. robots and programs developing to the point that humans could not control them. Make sure some technologically advanced robot doesn’t rise up and “byte” you –control your own fate and order your coin today!

As humanity grows and expands, so too does our need to develop new and more advanced technology. Robotics and A.I. are not only inevitable but are currently in development. This 2019 Austria Artificial Intelligence Silver-Niobium Coin celebrates these technological accomplishments as well as serving as a subtle warning. Get yours now before the robots get YOU!