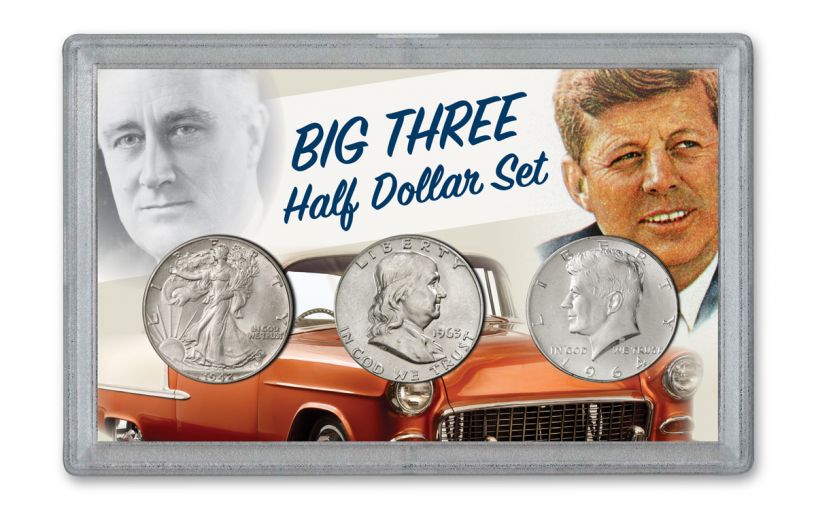 Availability: In Stock
This item will ship within 2 business days.
Item #
345054

The Big Three Half Dollar Set

While you’ll often hear the phrase “the Silver Dollar is king” in collecting circles, that wasn’t always the case. Between 1935 and 1971, the United States Mint didn’t strike any Silver Dollars – zero, nada, zilch! Instead, the largest 90% silver coins in circulation during that time were these beautifully-designed half dollars! This set brings together those coins – the “Big Three” Silver Half Dollars. The coins include the Walking Liberty Half Dollar, the Franklin Half Dollar, and the coveted 1964 Kennedy Half Dollar, the only year the coin was minted in 90% silver.

The set comes housed together in a custom-designed insert with a clear plastic holder. Dates will vary except for the 1964 Kennedy Half Dollar. Assembling a collection like this is no easy task. Melted for their silver or worn out in circulation, the remaining population of each coin just gets smaller and smaller with every passing year. But now you can own ALL THREE of these historic U.S. Half-Dollar designs in a single set! Just hurry – only a limited number of these Big Three Silver Half Dollar Three-Piece Sets are available. Order yours now!