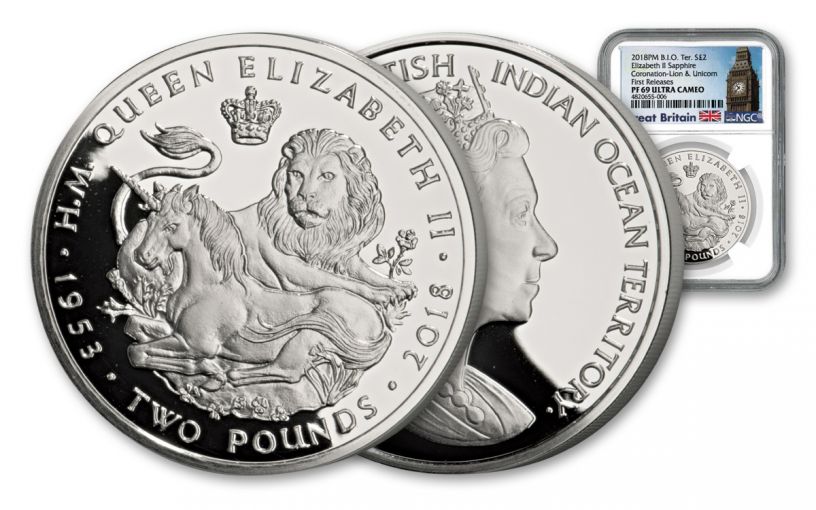 Availability: Out of Stock
This item is currently Out of Stock. Please sign up to be notified if this product becomes available.
Item #
332800
Add to Wish List Add to Wish List Wishlist is for registered customers. Please login or create an account to continue. Add to Compare
Product Description

The Lion, the Unicorn and the Queen

Great Britain’s Queen Elizabeth ascended to the throne as a young 27-year-old on June 2, 1953. It was a true-life fairy tale story. Her coronation was also the world’s first major international event to be broadcast on television with millions of people around the world tuning in to see for the first time a ceremony that had been held for every English monarch for 1,000 years.

To honor the 65th anniversary of this truly historic event, the government and treasury of the British Indian Ocean Territory (BIOT) have issued a new 2018 Sapphire Coronation Lion & Unicorn silver coin. The 65th Anniversary is associated with the gemstone sapphire, symbolic of loyalty – a fitting theme for Great Britain’s popular and beloved monarch.

Minted by the world-renowned Pobjoy Mint, this elegantly designed coin features a lion and unicorn. The image of these two animals together dates back to 1603 when James VI of Scotland became James I of England after he united Scotland and England into one kingdom. In the 400 years since, the lion and unicorn have become intimately associated with royalty and therefore Queen, Elizabeth II herself.

Just 2,000 proof coins were ever struck so order yours now before they’re all gone!

This coin will make a fantastic addition to any collection. Get your 2018 Sapphire Coronation Lion and Unicorn 2-Pound Silver coin in Proof State 69 condition today!