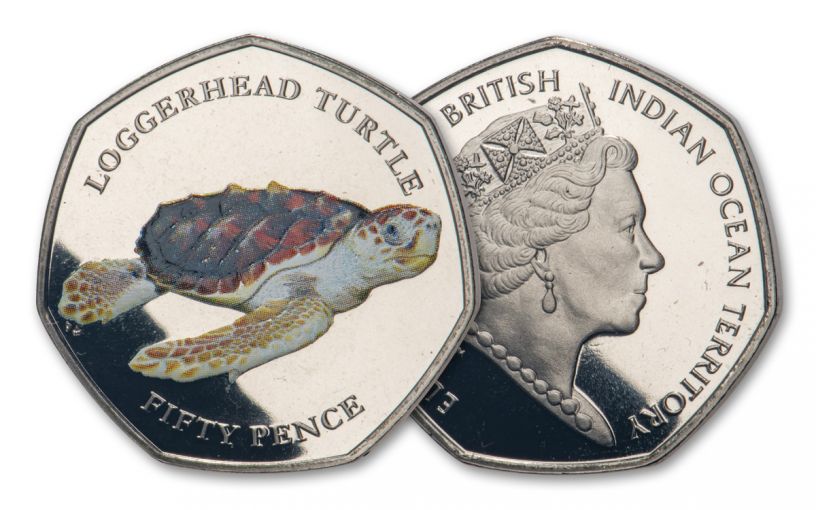 Availability: In Stock
This item will ship within 2 business days.
Item #
356384
Add to Wish List Add to Wish List Wishlist is for registered customers. Please login or create an account to continue. Add to Compare

Just one glimpse at the Loggerhead sea turtle and you’ll quickly understand how it got its name: its head is a broad, massive alien-like bulb that looks like a big log. But don’t let appearances deceive you; while that head and its sleepy eyes may like look innocent enough, the Loggerhead uses its powerful jaws to crush and crunch other creatures such as clams, crabs, mussels, sea urchins and occasionally fish to keep its belly full.

Now you can bring one of these big guys home thanks to this awesome legal-tender proof that features this unique sea turtle in full color! Struck by the world-renowned British Pobjoy Mint in eight grams of gleaming Cupronickel (CuNi), this legal-tender 50-pence coin was expertly crafted from hand-selected planchets, polished dies and multiple strikes to produce beautifully frosted details rising over mirror-like fields.

The seven-sided coin depicts a big Loggerhead in brilliant shades of brown, white and yellow effortlessly gliding through the water propelled by its massive flippers. The third release in Pobjoy’s Turtle Series, this coin is legal tender in the British Indian Ocean Territory (BIOT), an area that plays an important role in the life of this marine animal thanks to the territory’s shallow inlets which provide much-needed foraging ground for immature turtles.

Full-grown Loggerheads can weigh around 350 pounds and their shells measure nearly three feet in length. When swimming underwater, their large flippers look like wings as they glide through ocean currents in search of food. Like all sea turtle species, Loggerheads face many threats that impact their population numbers. Coastal development has reduced the area where they can successfully nest, dogs and other animals often destroy their nests, and humans routinely harvest their eggs for food.

The 2019 BIOT 50-Pence 8-gm CuNi Loggerhead Turtle Colorized Proof is one of the most exotic coins you’ll ever see! Don’t wait; add it your collection today!