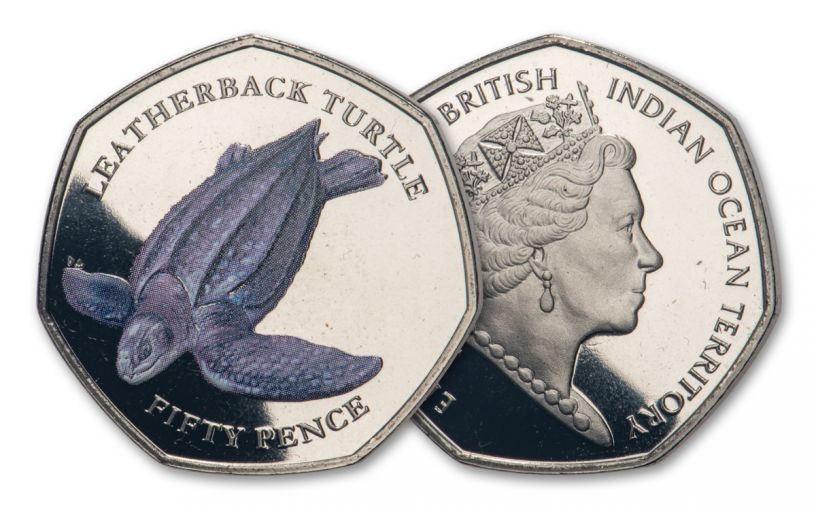 Availability: In Stock
This item will ship within 2 business days.
Item #
356385
Add to Wish List Add to Wish List Wishlist is for registered customers. Please login or create an account to continue. Add to Compare

Let the World’s Largest Turtle Dive Into Your Collection

Now you can bring this giant turtle home to your collection courtesy of this awesome legal-tender proof that features this unique sea turtle in full color! Struck by the world-renowned British Pobjoy Mint in eight grams of gleaming Cupronickel (CuNi), this legal-tender 50-pence coin was expertly crafted from hand-selected planchets, polished dies and multiple strikes to produce beautifully frosted details rising over mirror-like fields.

The seven-sided coin depicts a massive Leatherback in brilliant shades of blue, grey and white as it descends in deep ocean waters. The fourth release in Pobjoy’s Turtle Series, this coin is legal tender in the British Indian Ocean Territory (BIOT), an area that plays an important role in the life of this marine animal thanks to the territory’s shallow inlets which provide much-needed foraging ground for immature turtles.

The hydrodynamic shape of the Leatherback Turtle helps it go where no other turtles can go. These intrepid ocean creatures can dive to depths of 4,200 feet and can stay under water for nearly an hour and a half! The Leatherback has also adapted to the temperatures of the ocean’s cold depths – its large body, blood flow and a thick layer of fat helps it generate and retain body heat, thus allowing it to survive in cold water where other turtles cannot. Classified as vulnerable, only about 1 out of every 1,000 hatchlings ever reach adulthood. Those that do face the constant threat of fishing lines & nets, collisions with boats and the consumption of floating plastic debris that is commonly mistaken for their favorite food: jellyfish.

The 2019 BIOT 50-Pence 8-gm CuNi Leatherback Turtle Colorized Proof is one of the coolest coins you’ll ever see! Don’t wait; add it your collection today!