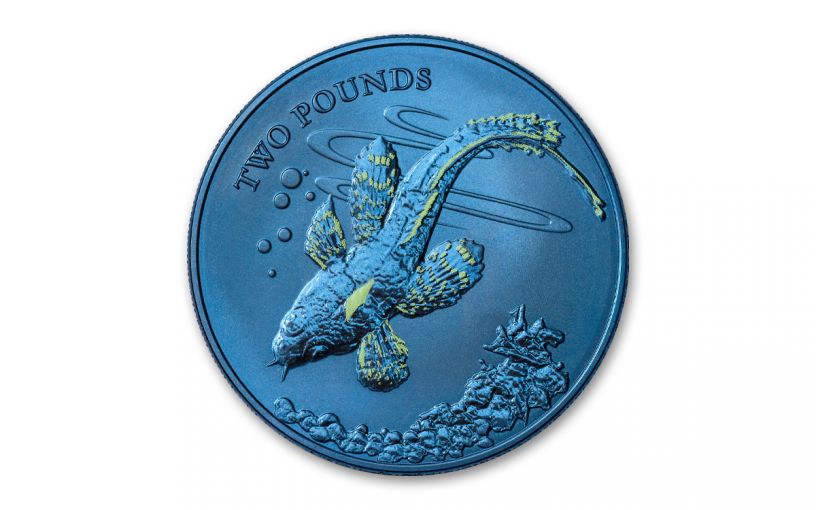 Availability: In Stock
This item will ship within 2 business days.
Item #
410090

Beneath the surface of the waters off the Antarctic coast one can find a strange-looking fish swimming at depths from between 300 and 2,000 feet. It is the Plunderfish, and with a name that exotic you just know it has to be a remarkable denizen of the deep. Despite its name and importance to the bottom fauna of the continental shelf, however, the Plunderfish is not a well-known sea creature. That’s all about to change thanks to an exciting new coin release from The British Pobjoy Mint that showcases this strange fish in way accomplished by few other coins.

The Amazing Features of Antarctica’s Plunderfish

First off, this £2 (two pounds) legal-tender coin is struck in 10 grams of dazzling Blue Titanium as if to capture the vibrant color of the Southern Ocean that surrounds the Antarctic continent. On the surface of the coin you’ll see the Barbeled Antarctic Plunderfish swimming along in search of prey like small invertebrates found on or near the sea floor. What makes the Plunderfish so extraordinary is not the fact that it produces antifreeze glycoproteins that allows it to occupy freezing habitats unavailable to most other fishes (although that IS pretty cool!), but that its sales have Ultraviolet (UV) properties allowing them to glow brightly when exposed to UV light. To replicate that effect, this coin has undergone a special process to highlight some of the scales on the design with special ink so that the coin actually glows in the dark!

What’s more, this amazing coin comes in original Brilliant Uncirculated (BU) condition with razor-sharp details that are as fresh and crisp as the day it left the mint. Plus, each coin available in here will comes beautifully housed in its original mint packaging that consists of a stunning red box with a Certificate of Authenticity. Released on Behalf of the British Antarctic Territory (BAT), a sector of Antarctica claimed by the United Kingdom as one of its 14 British Overseas Territories, just 5,000 of these The 2021 Ten-Gram Blue Titanium Plunderfish Glow-In-the-Dark Coins will be available for worldwide release.

You don’t have to go on a fishing expedition to hook one of these beauties. Just reserve yours now and you’ll have a glowing fish story you can share with your friends and family!

This Brilliant Uncirculated 2021 Ten-Gram Blue Titanium Plunderfish Glow-In-the-Dark Coin is sure to stand out in your collection. Click one to your cart today!