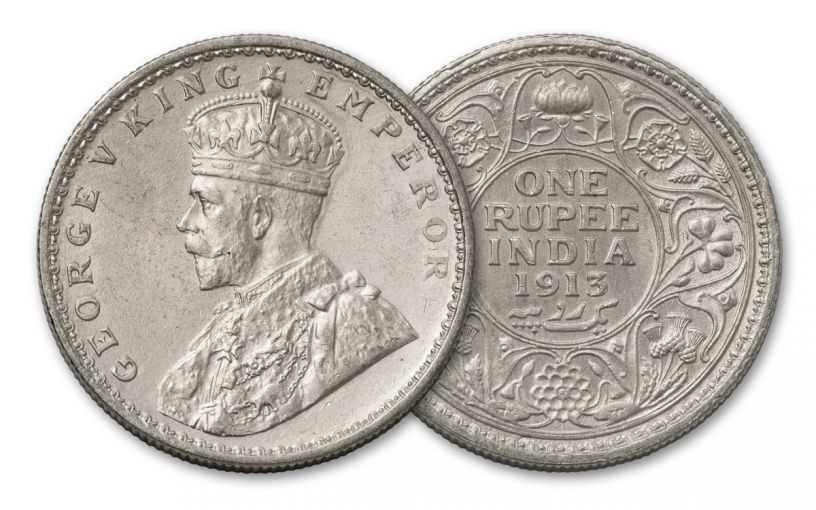 Availability: Available for Order
This item will ship 03/02/21
Item #
367502
Add to Wish List Add to Wish List Wishlist is for registered customers. Please login or create an account to continue. Add to Compare

In 1858, after 100 years of control by the East India Company, the British Crown was established in India, and would maintain in control until 1947, when Great Britain relinquished control and India gained its independence. During Britain’s control, silver Rupees circulated in India featuring the reigning monarch. We recently secured a hoard of over 800 British India Rupees from the reign of King George V — a sizable hoard—and we’re making them available while our supply lasts!

A Coin Fit For A King

Struck between 1911 and 1936 in 91.7% fine silver, each coin features the portrait of King George V. a grandson of Queen Victoria, George V was the father of not one but TWO kings! His eldest son, Edward VIII, abdicated the throne to marry American divorcee   Wallis Simpson. His second son, Albert, became the next king titled as George VI, thus giving Great Britain three kings in less than a year! The bearded George V dominates the obverse of this coin wearing his royal robes and St. Edward’s Crown, the centerpiece of the Crown jewels.

Capture a moment in time when Great Britain ruled India with this vintage and collectible 1911–1936 British India Silver Rupee of George V. Click it to your cart today!