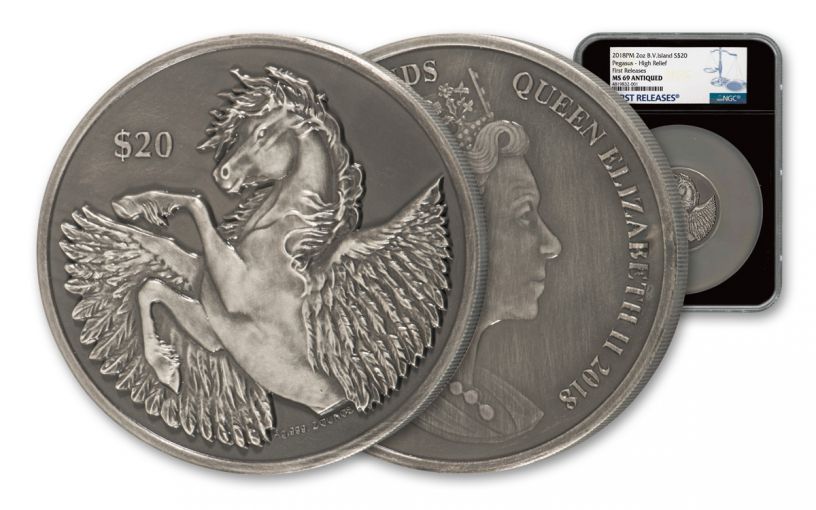 Availability: Out of Stock
This item is currently Out of Stock. Please sign up to be notified if this product becomes available.
Item #
336792
Add to Wish List Add to Wish List Wishlist is for registered customers. Please login or create an account to continue. Add to Compare

Get Your Pegasus Silver Reverse Proof Before Our Supply Flies Away

When one thinks of mythical deities, the first images that come to mind are of gods, goddesses and angels. But perhaps the most beautiful mythological being of them all is Pegasus – the immortal winged stallion who carried the thunderbolts of Zeus. Almost always depicted as pure white, Pegasus has appeared on coinage since ancient times, but never has this swift flying horse looked as magnificent as it does on this coin struck by the artisans of Great Britain’s world-renowned Pobjoy Mint.

The beauty of Pegasus on this coin is truly divine! This fabulous Two-Ounce Silver Pegasus Proof was issued in 2018 on behalf of the British Virgin Islands. The dynamic image of the majestic Pegasus rearing up in its hind legs is simply stunning. The winged mythical creature looks as if it’s going to fly right off the coin! What makes it even more spectacular is the added feature of its antiqued finish. The varying degrees of the lightness and darkness of the finish create an effect that is absolutely breathtaking!

Plus, this coin has been certified, graded and encapsulated by the Numismatic Guaranty Corporation (NGC) to be in near-perfect Mint State-69 (MS69) condition, a distinction that means your almost-flawless coin will showcase an impressive full strike and indistinguishable imperfections – well above and beyond the quality of the vast majority of coins in the series. In addition, NGC has also certified it as a First Releases (FR) coin, meaning it was received by NGC or an NGC-approved depository by the release date or on the business day within 24 hours of the official release date! It will also come sonically sealed in an acrylic case with a black core.

The stories of Pegasus and his adventures in Olympus and on earth are legendary. He was the child of the sea-god Poseidon and the once-beautiful Medusa. This union angered the goddess Athena so much that she cursed Medusa to eternal ugliness. Pegasus did not enter the world, however, until the warrior Perseus cut off Medusa’s head and Pegasus sprang forth from her neck. Pegasus later agreed to be ridden by the warrior Bellerophon in order to defeat the monster Chimera. Bellerophon later fell from Pegasus when he attempted to ride to Mount Olympus. After many other exploits, Zeus transformed Pegasus into the constellation that can be seen today in the northern sky.

Pegasus’ wing-aided swiftness and ability to fly has captured the imaginations of equestrians for centuries. It’s no surprise then that the Pobjoy Mint, Europe's largest, oldest and most prestigious private mint, is behind this stunning coin and its antiqued finish.