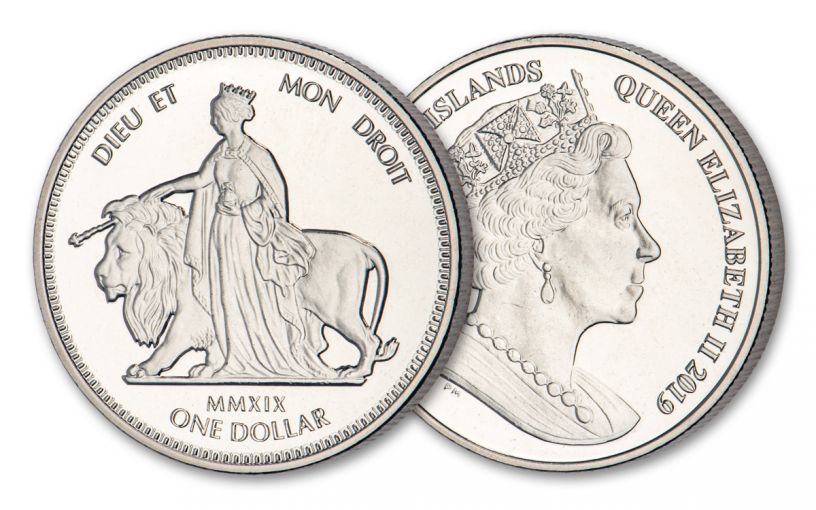 Availability: Out of Stock
This item is currently Out of Stock. Please sign up to be notified if this product becomes available.
Item #
353950
Add to Wish List Add to Wish List Wishlist is for registered customers. Please login or create an account to continue. Add to Compare

Two Queens and a Lion

In 1839, one of the most beautiful English coins in history was struck. It was the Una & The Lion Proof, issued with a limited mintage of just 400 pieces. It depicted a young Queen Victoria as Una (Truth), the main character of Edmund Spenser’s Fairie Queene, beside a lion thought to represent Great Britain. 2019 marks both the 200th anniversary of Queen Victoria’s birth and the 180th anniversary of the first Una & the Lion Proof.

This 28.28-gram cupro-nickel dollar from the British Virgin Islands commemorates these anniversaries by presenting the Una & the Lion design in Uncirculated condition, paired with the traditional modern obverse of Queen Elizabeth II. In Spencer’s poem, a ravenous lion is so overcome by the beauty of a princess that instead of devouring her, he becomes her loyal servant and watches over her day and night. The design shows Queen Victoria as Princess Una walking to the left of a lion. The French phrase “DIEU ET MON DROIT” meaning God On My Right – the motto of the British Monarchy – is above the image while underneath are the Roman numerals MMXIX (2019).

This special anniversary release has a limited mintage of just 10,000 pieces. The theme and low mintage for this release means that they will not be around for long. Make sure you don’t miss out, secure one for your collection today!