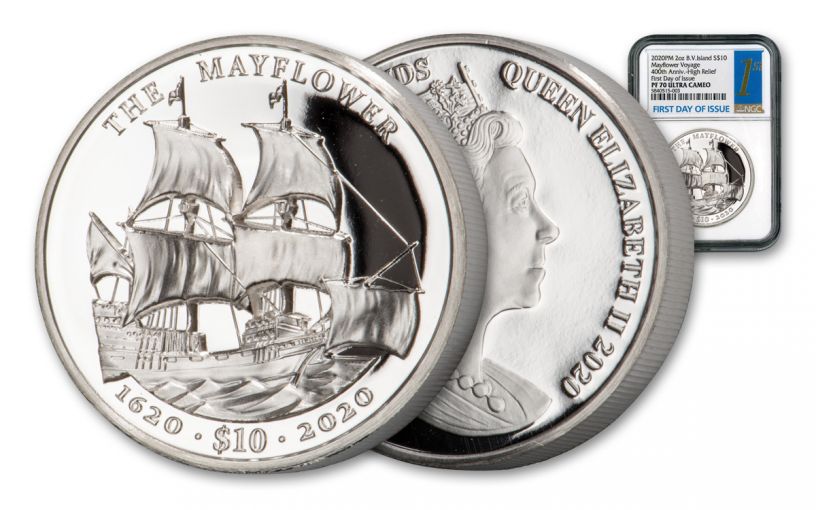 Availability: In Stock
This item will ship within 2 business days.
Item #
361248
CC Payments as low as
$149.50 / month
Add to Wish List Add to Wish List Wishlist is for registered customers. Please login or create an account to continue. Add to Compare

Set Sail With the Pilgrims

When the Pilgrims landed at Plymouth Rock in 1620 it was the culmination of a harrowing voyage across the Atlantic Ocean aboard the Mayflower, a tiny vessel measuring just 100 feet long that has since been described by some historians as being little more than wooden bathtub with masts. To pay tribute to the 400th anniversary of the little ship’s famous voyage, the British Virgin Islands has released a 1620-2020 dual-dated coin that captures the spirit and character of the fragile boat as it made its journey to America.

Struck by the world-renowned Pobjoy Mint in two ounces of highly pure 99.9% fine silver, the $10 legal-tender coin comes in gorgeous proof condition, meaning it was expertly crafted by the mint from hand-selected planchets, polished dies and multiple strikes to produce beautifully frosted details rising over mirror-like fields. Plus, the designs featured on the Mayflower 400th Anniversary Proof are made even more spectacular thanks to an Ultra High Relief finish that adds extra depth and dimension to the already impressive image.

Each Silver Mayflower 400th Anniversary Ultra High Relief Proof available in this offer has been graded by the Numismatic Guaranty Corporation (NGC) as being in flawless Proof-70 Ultra Cameo (PF70UC) condition, a distinction that means these perfectly-graded proofs will have ZERO imperfections – showing all features and fields exactly as the engraver and mint intended. In addition, NGC has certified that these proofs are First Day of Issue (FDI) coins, meaning they were received by NGC or an NGC-approved depository by the release date or on the business day within 24 hours of the official release date.

When the Mayflower reached America on November 11, 1620 after a voyage of 66 days, it was too late in the year to plant crops or build homes before winter set in. Instead, the Pilgrims stayed aboard the Mayflower where nearly half of the 102-person contingent died from scurvy and pneumonia. The 53 people who survived the winter established Plymouth Colony, just the second successful European settlement in America after the founding of Jamestown, Virginia in 1607. Today, more than 10 million living Americans are descendants from the original Pilgrims. The story of their courage in the face of hardships is a central theme in our nation’s culture and heritage, culminating with the observance of Thanksgiving each November.

The significance of the Pilgrims’ journey on the Mayflower cannot be underestimated. With that in mind, the extremely low limited edition for this proof that was set at a meager 620 seems far too low for the many thousands of people who would like to own one. Grab the 2020 British Virgin Islands Two-Ounce Silver Mayflower 400th Anniversary Ultra High Relief Proof today before our small allotment sails out of reach.

400th ANNIVERSARY OF THE MAYFLOWER – This coin pays tribute to the 400th Anniversary of the Mayflower in 1620 and features the vessel braving its way across the Atlantic on its voyage to America along with the dual dates of 1620 and 2020, The coin’s obverse shows a portrait of Queen Elizabeth II.

KEY FIRST DAY OF ISSUE CERTIFICATION – NGC has certified that this proof is a First Day of Issue (FDI) coin, independent authentication that it was released by the mint during the premier day of the series’ issue.

EXTREMELY LOW MINTAGE – The maximum worldwide limited edition for this prof has been set at just 620.

Celebrate the voyage of the Pilgrims with the 2020 British Virgin Islands Two-Ounce Silver Mayflower 400th Anniversary Ultra High Relief Proof. This limited-edition release will not last long, so order yours now!