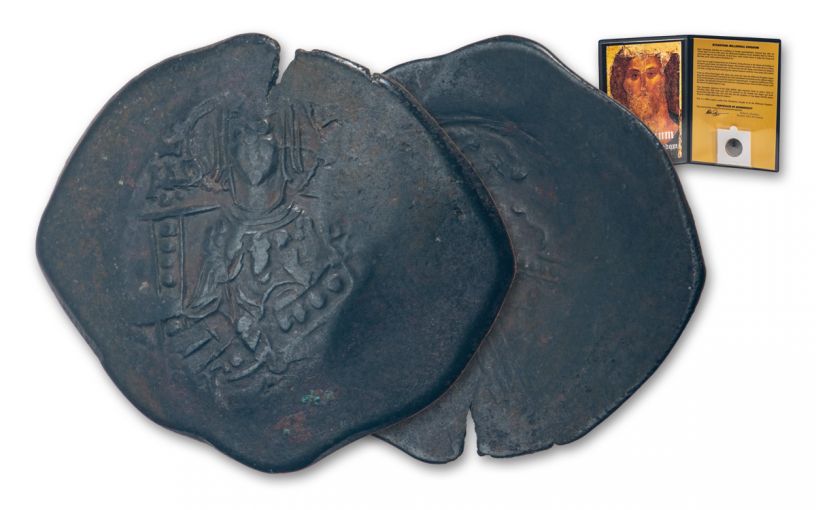 Availability: Out of Stock
This item is currently Out of Stock. Please sign up to be notified if this product becomes available.
Item #
354621
Add to Wish List Add to Wish List Wishlist is for registered customers. Please login or create an account to continue. Add to Compare

The Face of Christ Leads the First Crusaders to Victory

When striking coins for the masses, the emperors of the Byzantine Empire wanted to make sure they were associated with the highest power imaginable while also promoting their piety. That’s why they struck coins featuring the face of Jesus Christ. It’s probably no coincidence that during this time the outer edges of the Byzantine Empire was being aggressively chipped away by the Seljuq Turks and for the next 100 years or so the Empire lobbied for Papal support in assembling a coalition to oust the Turks from the Holy Land.

This particular coin was struck in the tenth century and displays the bust of Jesus Christ on the obverse. Subsequent emperors followed suit, striking the coin up until around 1099 following the end of the First Crusade, during which the Byzantine Empire regained all its lost territory. These bronze coins are categorized as “Anonymous Folles” because the ruling emperor’s name and portrait are not part of the design. In other words, they are anonymous. Folles is plural of follis, the denomination of the coin.

As coins of the realm, Anonymous Folles circulated for hundreds of years during the Middle Ages. Few examples exist today and those that have survived down through more than a millennium of history are typically worn, especially on the face of Christ, which occupied the highest point of the coin.

These coins are important historical artifacts and will make a wonderful addition to any collection. Hurry and secure yours before our limited supply runs out.