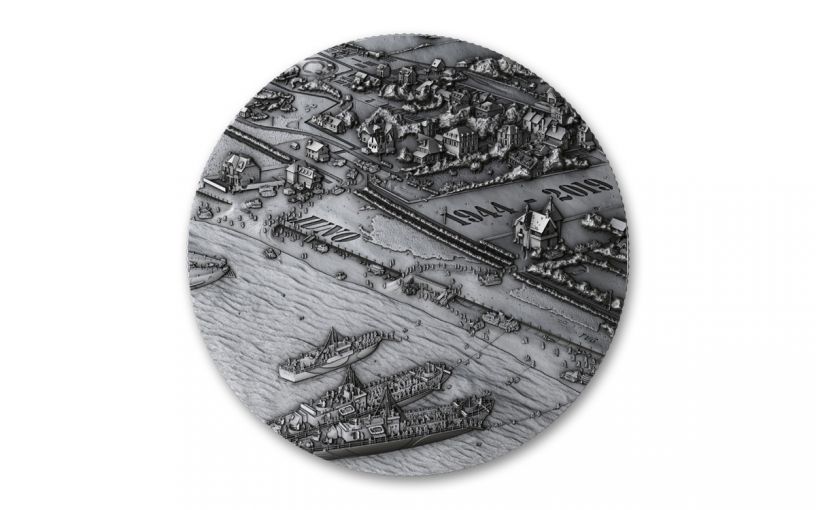 Availability: Out of Stock
This item is currently Out of Stock. Please sign up to be notified if this product becomes available.
Item #
353944
Add to Wish List Add to Wish List Wishlist is for registered customers. Please login or create an account to continue. Add to Compare

A Massive Coin Befitting the Magnitude of the D-Day Invasion

When conversations turn to D-Day, the pivotal World War II battle in Europe fought on June 6, 1944, most people remember American GIs storming across the bloody sands at Omaha Beach, the courageous assault at Pointe du Hoc by American Rangers, and the British attacks at Gold and Sword. Sadly, a critical mission is often ignored: The role of the Canadian military at Juno Beach. Now, to pay tribute to not only the 75th Anniversary of the D-Day Landings, but to honor the courage and valor of Canadian troops that fought that day, a silver commemorative coin has been released with a massive size befitting the D-Day invasion.

Struck by the Royal Canadian Mint in a full kilo of 99.99% pure silver, this D-Day: Snapshot in Time coin is an enormous legal-tender commemorative that measures more than 4 inches in diameter. Its design matches the size with an incredible bird’s eye view of the beach on that fateful day depicting Juno Beach as one would have seen it from a photo reconnaissance plane flying high above the fray. Struck in jaw-dropping Ultra High Relief, you can see soldiers from Canada’s 3rd Canadian Infantry Division storming ashore from their landing craft with support from the 2nd Canadian Armored Brigade. The amazing detail towers above the coin’s surface like a 3-D topographical map! And the pièce de résistance? The addition of an antiqued finish to add even more depth and character to these fantastic coins. The overall appearance is simply extraordinary! Each will also come displayed in its original government packaging: a beautiful wooden presentation case accompanied by a certificate of Authenticity.

Affectionately nicknamed the “Water Rats” by famed British Field Marshal Sir Bernard Montgomery for its successful efforts at clearing the channel ports following the D-Day invasion, the 3rd Canadian Infantry Division was initially formed to serve in World War I. It fought through the final offenses of World War II, liberating Nazi concentration camps along the way. The 2nd Canadian Armored Brigade fought in Northwest Europe longer than any other armored formation, from D-Day to VE Day. Two of the brigade’s tanks, one named the Holy Roller and the other the Bomb, made it to the end of the war unscathed – the only Canadian tanks to claim that honor.

Canadian soldiers had a frontline view of victory on D-Day, and now with this massive coin, you can get a sense of the magnitude of this historic event that was unprecedented in both size and scope. The coordinated combined operations amphibious assault required more than a year of planning and training. Attention to detail was key then, and it is crucial on this coin, where even the smallest feature has historical significance. Each coin takes on even more significance when you realize that the Royal Canadian Mint struck just 400 of these poignant coins for worldwide release. Order your coin now while we still have them available and proudly display it in a place of honor!