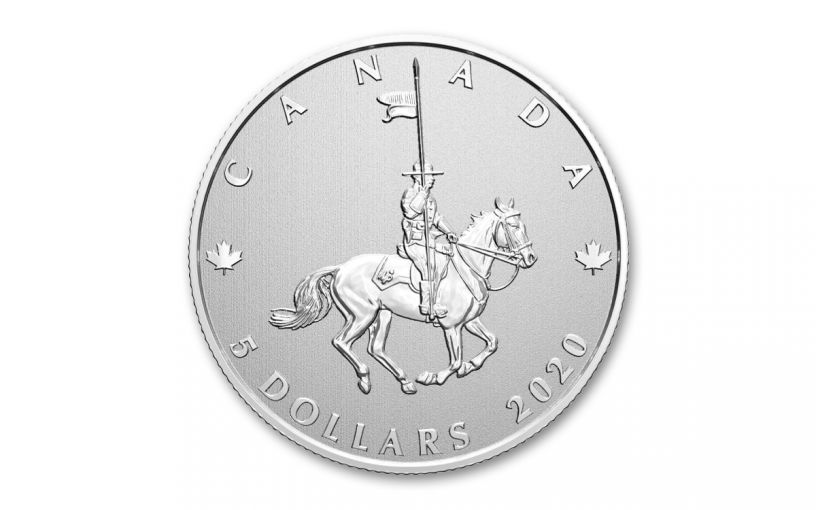 Availability: In Stock
This item will ship within 2 business days.
Item #
358963
Review this product
Add to Wish List Add to Wish List Wishlist is for registered customers. Please login or create an account to continue. Add to Compare
Product Description

The Mounties Always Get Their Man – Make Sure You Get Their Coin!

For many people, the mental image of a Canadian Mountie is one of a handsome square-jawed hunk dressed in a form-fitting scarlet jacket, blue riding breeches and shiny leather boots mounted on a horse singing a romantic duet with a beautiful woman after rescuing her from the clutches of a mustache-twirling villain. For others, the image of a Mountie is that of a no-nonsense lawman who operates under the code of “The Mountie always gets his man.”

Such images and ideals have long been associated with the Royal Canadian Mounted Police (RCMP) since it came into existence in 1920. To commemorate the 100th anniversary of Canada’s federal police force, this special, one-year-only commemorative was released with a classic depiction of a Mountie.

As one of the most iconic symbols of Canada, the Mountie plays a huge role in the culture and mindset of our neighbors to the north – and this pure silver coin captures that attitude with a simple-yet-elegant design that depicts a “Royal Gendarmerie of Canada” astride his horse dressed in his parade uniform. He deftly guides his faithful steed with his left hand while in his right he carries his regimental guidon.

Struck in a quarter ounce of 99.99% pure silver, this legal-tender $5 coin also comes in modified Gem Specimen (SP) condition, a process that gives it a beautiful satin appearance. Similar to a proof finish, a specimen coin is one that has been struck more than once to ensure a sharp design giving this coin a mirrored proof-like appearance.

The Royal Canadian Mint set the maximum worldwide edition limit for this coin at just 100,000, and each one available in this offer will come in its original mint packaging consisting of an informative folder that not only houses this coin but provides information about the famous Royal Canadian Mounted Police. The Mounties always get their man – now make sure you get their coin!

Coin collectors, silver stackers and people who appreciate the heritage of Canada will all be clamoring for this fantastic silver commemorative. Click one – or several – to your cart today!