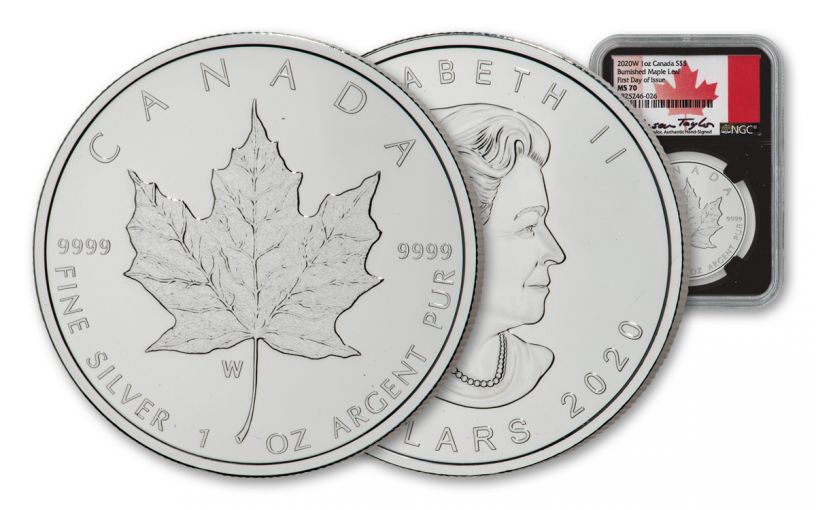 Availability: Call-In Only
This item is only available on a Call-In basis. Please call 1-800-510-6468 to speak to a representative.
Item #
354966
Add to Wish List Add to Wish List Wishlist is for registered customers. Please login or create an account to continue. Add to Compare
Product Description

First issued in 1979, the Canadian Maple Leaf Bullion series has become one of the most collected bullion coin series in the world. Renowned for the extremely high purity, legal-tender value and hi-tech security features of its coins, the series continues to entice collectors and bullion buyers alike into adding Maple Leafs to their collections.

But in 2020, something big is happening.

Since the series’ inception, the Canadian Maple Leaf has been struck at the Royal Canadian Mint (RCM) facility in Ottawa. But in 2019, for the first time ever, One-Ounce Silver Maple Leafs are being struck at the RCM facility in Winnipeg. Though struck in 2019, each coin bears a 2020 date and includes the all-important “W” mint mark.

Mint marks have been around nearly as long as coins have been around – and collectors love them. Why? Because different mints don’t typically strike the same number of a specific coin in a given year. Using that little mark, we can determine exactly how rare a coin is compared to its total mintage.

In addition to the first-ever “W” mint mark on a Canadian One-Ounce Silver Maple Leaf, these Winnipeg Maples also feature a burnished finish. To achieve this satin-like appearance, each planchet is carefully burnished ahead of striking and given a stronger strike than those used for standard bullion coins. The result is a sharper design, along with an attractive, smooth finish.

These Winnipeg Mint Mark Silver Burnished Maples are not intended for widespread circulation, and quantities are highly limited. While millions of standard Silver Maple Leafs are struck each year, the mintage for the One-Ounce Silver Burnished Maple Leaf will be only a few thousand. That’s a far cry from the coin’s counterpart in the United States, where hundreds of thousands of Burnished American Silver Eagles are struck.

Minted in a troy ounce of highly pure 99.99% fine silver, the Silver Maple Leaf earns its name from the incredibly detailed maple leaf that graces its reverse. In addition to the maple leaf, the word “CANADA” arches over the image, while the coin’s purity, “9999,” is inscribed on both sides of the leaf. An inscription along the bottom half of the rim reads, “FINE SILVER 1 OZ OR PUR.” A background finish of radial line serves to thwart any would-be counterfeiters, as does a micro-engraved mint mark – a small leaf, engraved with the number “20” – that provides further security. The coin’s obverse features the regal portrait of Queen Elizabeth II along with the “5 DOLLARS” legal-tender denomination and the 2020 year date.

Only 10,000 of these One-Ounce Silver Burnished Maple Leads were authorized for striking in Winnipeg and each one available in this offer comes graded by the Numismatic Guaranty Corporation (NGC) as being in flawless Mint State-70 (MS70) condition. That distinction means your perfectly-graded coin will have ZERO imperfections – showing all features and fields exactly as the engraver and mint intended.

In addition, NGC has certified these Silver Maple Leafs to be First Day of Issue (FDI) coins, a designation that means they were received by NGC or an NGC-approved depository by the release date or on the business day within 24 hours of the official release date. Each will come sonically sealed in an acrylic holder with a black display core and exclusive label that was personally signed by Susan Taylor, the former Senior Engraver at the Royal Canadian Mint. Taylor worked at The Mint from 1981 until her retirement in 2017 and won the American Medal of the Year Award in 2016.

Whether you’re an avid Silver Maple Leaf collector, an avid silver stacker, or someone who just loves collecting anything Canadian, this deal is for you! Add one of these first-ever “W” mint marked One-Ounce Silver Maple Leafs to your cart today!

For more than four decades, collectors have clamored over each new annual release of Maple Leafs. 2020’s silver class is already looking to command just as strong of demand with this first-ever Winnipeg Maple Leaf. Don’t wait to get yours; order one for your collection today!