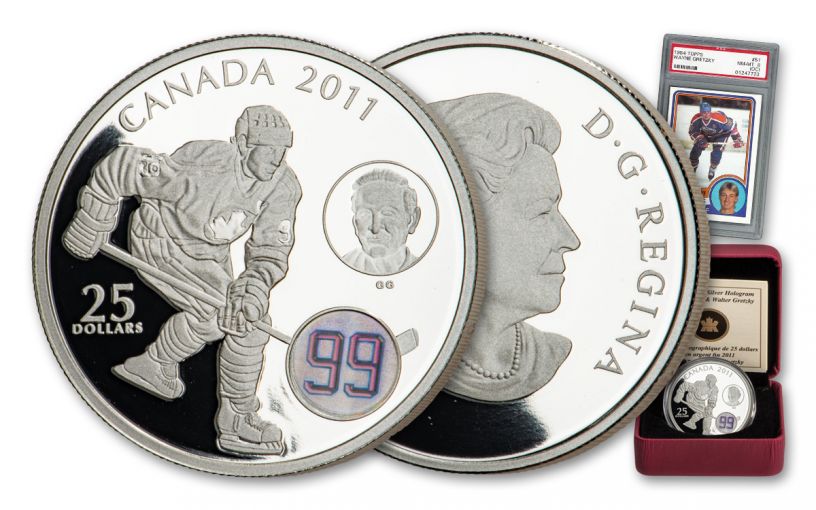 Availability: Out of Stock
This item is currently Out of Stock. Please sign up to be notified if this product becomes available.
Item #
364375
Add to Wish List Add to Wish List Wishlist is for registered customers. Please login or create an account to continue. Add to Compare

Silver Coin Celebrates “The Great One”

The Gretzky family is perhaps the most well-known sports family in Canada, and it’s well deserved. Wayne — nicknamed “The Great One” — is acknowledged by most experts as the greatest hockey player that ever lived! He developed his skills both on and off the ice thanks to his father Walter, who created a rink in the family’s back yard. Now, father and son appear together on a unique hologram coin.

Released by the Royal Canadian Mint in 2011, this $25 legal-tender coin was struck in a full ounce of 99.99% pure silver and features a unique hologram that revels Gretzky’s famous Number #99 jersey number when rotated. The image shows Gretzky wearing a Canadian Nation Team uniform gliding across the ice. Just to the right of the image is an inset featuring a portrait of Walter, a proud papa beaming down at his son. Fittingly, the proof was limited to a mintage of just 19,999 coins.

In addition to the coin, you will also receive a 1984 Topps Wayne Gretzky Card graded by Professional Sports Authenticator (PSA) in Near Mint-Mint 8 condition. After producing no hockey card sets in 1982 and 1983, Topps returned in 1984 with a small, 165-card set that included just three cards each for the seven Canadian teams that existed at that time in the NHL. That meant that Gretzky’s team, the 1983-84 Stanley Cup Champion Edmonton Oilers, had just three players represented. Not yet known as The Great One then, we’re lucky there was even a Gretzky card at all in 1984!

The NHL has never seen the likes of Gretzky’s jaw-dropping playmaking skills, and it may never see them again. In fact, Gretzky holds or shares 61 records listed in the League’s Official Guide and Record Book, including most career points (2,857), most career goals (894), most career assists (1,963), most points in a season (215), most goals in a season (92), most assists in a season (163) and the longest streak with at least one point (51 games).

Get the coin. Get the Card. Capture the legend. Add the 2011 Canada One-Ounce Silver Gretzky Hologram Proof and the 1984 Topps Gretzky card to your collection today!

Pay tribute to The Great One with this 2011 Canada One-Ounce Silver Wayne Gretzky Hologram Proof. Click it to your cart today!