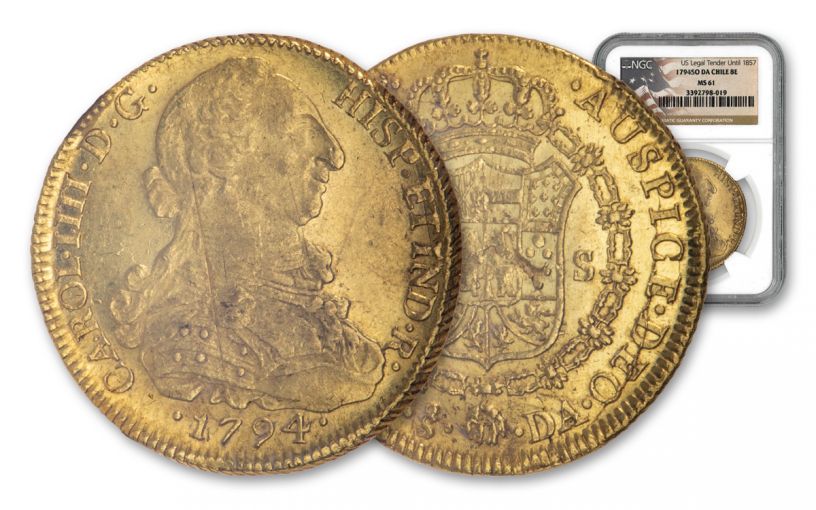 Availability: Out of Stock
This item is currently Out of Stock. Please sign up to be notified if this product becomes available.
Item #
254978
Add to Wish List Add to Wish List Wishlist is for registered customers. Please login or create an account to continue. Add to Compare

Look at that luster – after 225 years, this beautiful Gold 8 Escudos coin from Chile still shines! Struck during the American presidency of George Washington, this coin has a history that we can only guess at. Coins like this circulated heavily around the entire world, including North America where they were accepted as official legal tender by the United States government until 1857!

For many of these coins, those long years of service meant destruction by being worn down in commerce or melted down to create new coins (including U.S. coins!). But not this piece – as one of just 40,000 struck in 1794 at the Spanish Colonial mint in Santiago, it has survived the years and today has been graded by the Numismatic Guaranty Corporation (NGC) as being in incredible Mint State-61 (MS61) condition.

To give you an idea how scarce this coin is – especially in such fabulous condition – NGC has graded just 12 of these coins. Just 12! And, as one of only five such coins to earn a Mint State grade, this 1794-So Gold 8 Escudo is tied for second highest ever graded, and the finest known at NGC.

It’s an incredible piece of history from the Santiago Mint in Chile. Order now and make it yours!