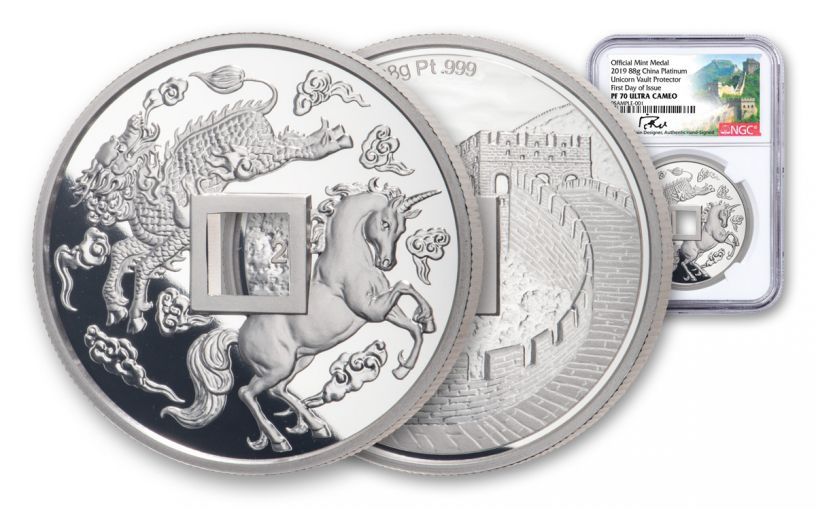 Availability: Call-In Only
This item is only available on a Call-In basis. Please call 1-800-510-6468 to speak to a representative.
Item #
353833
Add to Wish List Add to Wish List Wishlist is for registered customers. Please login or create an account to continue. Add to Compare
Product Description

Struck as a gorgeous proof in 88 grams of highly pure 99.9% platinum at China’s branch mint in Shanghai, the 2019 Unicorn Vault Protector features both Eastern and Western interpretations of the mythic beast, this time placed together on the reverse. The obverse displays a section of the Great Wall of China. As you would expect from any release hailing from the China Mint, the detail is incredible having been expertly crafted by the mint from hand-selected planchets, polished dies and multiple strikes to produce beautifully frosted details rising over mirror-like fields.

In fact, each 2019 China Platinum Unicorn Vault Protector Proof available in this offer has been graded by the Numismatic Guaranty Corporation (NGC) as being in flawless Proof-70 Ultra Cameo (PF70UC) condition, a distinction that means these perfectly-graded proofs will have ZERO imperfections – showing all features and fields exactly as the engraver and mint intended. In addition, NGC has certified that these proofs are First Day of Issue (FDI) coins, meaning that they were received by NGC or an NGC-approved depository by the release date or on the business day within 24 hours of the official release date. Finally, each magnificent proof coin will arrive sealed in a protective holder and encapsulated with a label that was personally signed by the coin’s designer Song Fei!

Just 88 of these special 25th Anniversary Unicorn Vault Protector Platinum Proofs will be struck by the China Mint. With the vast majority staying in China, don’t miss your chance to add one of these lucky coins to your private vault. Click one to your cart today!