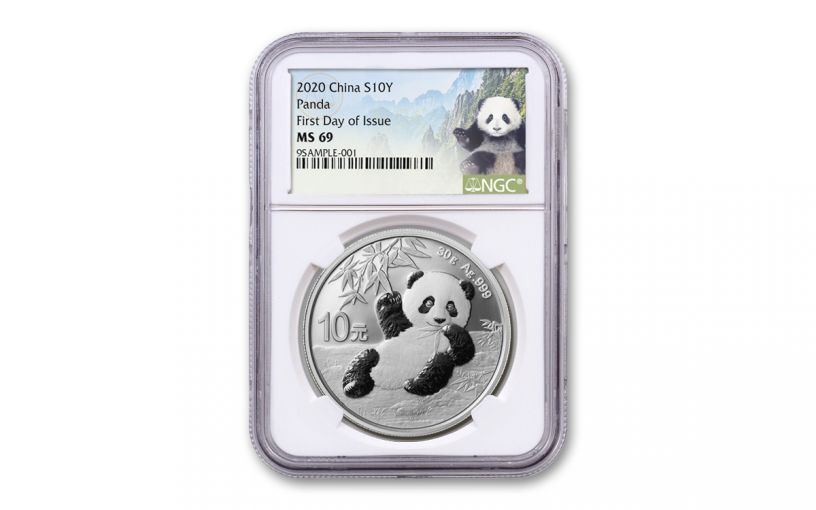 Availability: In Stock
This item will ship within 2 business days.
Item #
356255
Add to Wish List Add to Wish List Wishlist is for registered customers. Please login or create an account to continue. Add to Compare

Beloved for its precious metal content and intricate designs that change each year, the Chinese Silver Panda bullion series remains one of the world’s most celebrated programs. First released in 1983 and building in popularity every year since, the China Mint's Silver Panda series is now among the most popular on the planet.

Beautifully struck in 99.9% silver, each 30-gram coin features a new design with the 2020 design created by artist Song Lina. Ms. Song’s design for the 2020 Panda coin features a playful baby panda bear gleefully stuffing bamboo leaves into its mouth – an image that is sure to melt hearts as it becomes a centerpiece of many collections! The obverse displays the Hall of Prayer for Abundant Harvests located in Beijing’s Temple of Heaven. It is encircled by the phrase “People’s Republic of China” in Chinese along with the 2020 year date.

Your 2020 Silver Panda has been graded by the Numismatic Guaranty Corporation (NGC) as being in near-perfect Mint State-69 (MS69) condition, a distinction that means your almost-flawless coin will showcase an impressive full strike and indistinguishable imperfections – well above and beyond the quality of the vast majority of coins in the series. In addition, NGC has certified that your Silver Panda is a First Day of Issue (FDI) coin, meaning it was received by NGC or an NGC-approved depository by the release date or on the business day within 24 hours of the official release date. It will come sonically sealed in an acrylic holder with a white display core and a label displaying China’s flag.

Since 2016, China’s legendary Silver Pandas have been issued in metric weights, setting themselves apart from other silver coins minted around the world. In addition, simply acquiring one of these coins can be extremely difficult due to the fact that demand for them within China’s borders has been heating up, making them harder to find outside of the country.

No matter what your reasons are for collecting these fabulous coins, now is the time to bring a 2020 China Silver Panda home to your collection!

Don’t miss out on this chance to either continue your China Panda collection or to start a brand-new chapter. Selections from the series tend to sell out quickly, so don’t wait too long – click one to your cart today!