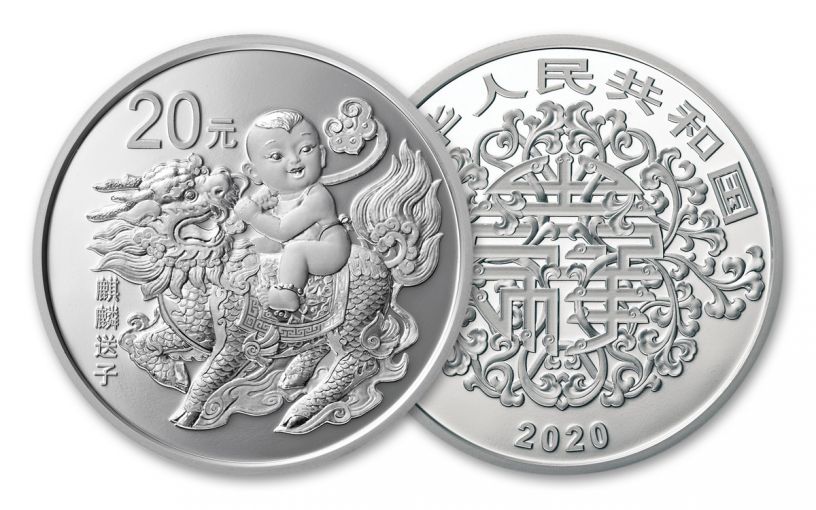 Availability: In Stock
This item will ship within 2 business days.
Item #
364062
CC Payments as low as
$147.50 / month
Add to Wish List Add to Wish List Wishlist is for registered customers. Please login or create an account to continue. Add to Compare

On May 20, 2020, the People’s Bank of China released the 2020 Auspicious Culture gold and silver commemorative coins – a six-coin series consisting of one bimetal, two gold, and three silver coins. As most collectors know, ANY coin release coming out of China is greeted with an enthusiastic response across the globe, and these coins are no different. But therein lies the problem since it’s been estimated that only 2% of these coins ever leave China. And with mintages as low as 5,000, that means only a handful ever make it outside China — and fewer still arrive on America’s shores.

In this offer you can secure the 60-gram silver coin representing “Offspring.” The coin features a cherub-like child riding a Qilin, a Chinese mythological unicorn believed to bring children to families. To the left of the design on this 20 Yuan piece are Chinese characters that translate into the phrase “a visit from the stork,” thus fulfilling the strong desire many people have for the birth of children.

In Chinese culture, the mythical Qilin symbolizes good luck and prosperity. According to tradition, its appearance heralds the birth or death of a particularly benevolent ruler or sage scholar. The obverse is common to the series and features the Chinese characters for “Auspiciousness” with traditional Chinese decorative patterns, country name, and the year of issue.

Each coin available in this offer was expertly crafted by the mint from hand-selected planchets, polished dies and multiple strikes to produce beautifully frosted details rising over mirror-like fields. Measuring 40 mm in diameter, the silver coin was struck in highly pure 99.9% fine silver and is limited to 20,000 pieces.

Don’t wait for these Auspicious coins to completely disappear into the hands of other collectors, secure yours now to avoid disappointment later!