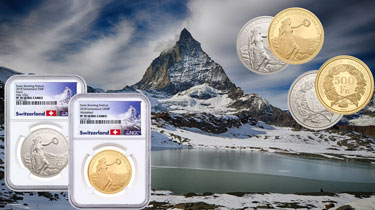 GovMint will soon receive an exciting selection of the 2018 edition of the annual Shooting Thaler silver and gold coins issued by Switzerland, which are released to commemorate the very popular shooting tournaments held there.

A thaler, or taler in German, is a silver coin issued between the 15th and 19th centuries that is considered a precursor of the dollar.  Its name comes from the German word tal, which means valley, so a thaler is a person or thing from the valley.  The name itself is an abbreviated form of “Joachimsthaler", a coin from the town of Joachimsthal, in the Kingdom of Bohemia (part of the Czech Republic today) that had silver mines.  The first thalers were struck there in the 1500s.

Swiss shooting thalers are issued to celebrate the annual shooting festivals held in Switzerland, a country where marksmanship is by far the most popular sport and whose people are fervent supporters of their right to bear arms.  They are issued by the various swiss cantons, or constituent member states of the nation, depending on the location of each festival.  Every five years there is a larger, federal shooting festival that draws huge crowds.

The festivals were first held during the Old Swiss Confederacy in the 15th century, when crossbows were used instead of rifles as has been the case since the 1800’s.  The shooting tournaments held in the 1800s and early 1900s were designed to raise funds for the widows and orphans of Swiss soldiers who gave their life in defense of their nation, a process that took place over an extended period as the nation evolved from a loose confederation in the 13th century to a federal state in 1848.

In addition, the modern festivals are not just designed to be fun for the members of Swiss Shooting Association but also have a practical aspect, which is to help keep the shooting skills of its members up to date.  That is important in a country that does not have an army and depends on its citizen soldiers for defense.

Classic shooting thalers were issued from 1842 to 1939 and are mostly very rare, expensive and hard to locate, while the modern ones have been issued since 1984.  These pieces mostly remain in Switzerland and other European countries, but some of them make their way to the U.S. market in part through the efforts of GovMint and its world coin expert, Hayden Tubbs.

As I explained in an overview on the series in 2016, Hayden has long been interested in the shooting thalers and said there is a small but dedicated group of collectors of these pieces in the U.S.  Past issues have increased in value, in some cases quite a bit, because of the popularity and low mintages of these coins and their alluring designs.

GovMint's selection of previous issues in this series is available here.

The 2018 festival will be held in Stans, which is the capital of the Swiss canton on Nidwalden that located in the center of the country that is known for its mountainous geography and popular resorts.

The most famous person who came from Stans was Arnold von Winkelried, a hero of the Swiss nation who gave his life during the Battle of Sempach in 1386, when the Swiss were defending themselves against an invasion by the Austrian Hapsburg Duke Leopold III.

During the battle the Austrian soldiers had long spears pointed far in front of them, while the Swiss soldiers were armed with short swords and spears, putting them at a considerable disadvantage.  Winkelried soon realized that he and his compatriots were doomed unless an opening could be made in the line of Austrians.  So, he rushed towards them, allegedly saying “Make way for liberty!” and falling dead soon afterward.  The gap he created in the Austrian line allowed the Swiss to achieve victory and save the cantons.  A memorial to him was erected in Stans, and in the years since these events Winkelried as emerged as a legendary figure in Swiss history. 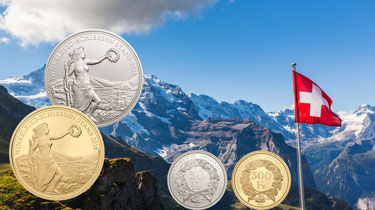 The 2018 Shooting Thalers are called the “Winkelried Shoot” in tribute to him and his sacrifice.

GovMint will carry all three versions in three options: gem proofs in capsules with their certificates of authenticity as well as Proof 69 and Proof 70 Ultra Cameo coins graded by NGC.

The common obverse design, unique for this year, is sure to be popular with collectors.  As in past years, it features a depiction of Helvetia, the Swiss allegorical figure that represents liberty, who appears to this day on circulating Swiss coinage holding a spear.

On the 2018 thalers she is shown standing partially nude on a mountain wearing a Roman-style toga that only covers her below her breast area.  She is shown holding a laurel wreath in her left hand, which is a symbol of the honors that are given to the festivals winners, and a rifle in her right hand, which is appropriate for the shooting tournament and as a symbol of the Swiss citizen solder.  In the background there is typical Swiss scenery including a town from the Alps and above appears the inscription for this year in German that translates as “Winkelried Shoot” plus the location and year.

The common reverse, which is used on all past modern issues of the series, features the denomination of each piece, which is encircled by oak leaves and laurel plus a pair of crossed rifles below and a powder horn and bandolier.  There are also inscriptions in French and German above that translate into “redeemable during the shooting festival” since the coins can be redeemed for face value then but are technically not legal tender.

Be sure to grab your 2018 Shooting Thalers quickly, as a sell-out is likely!