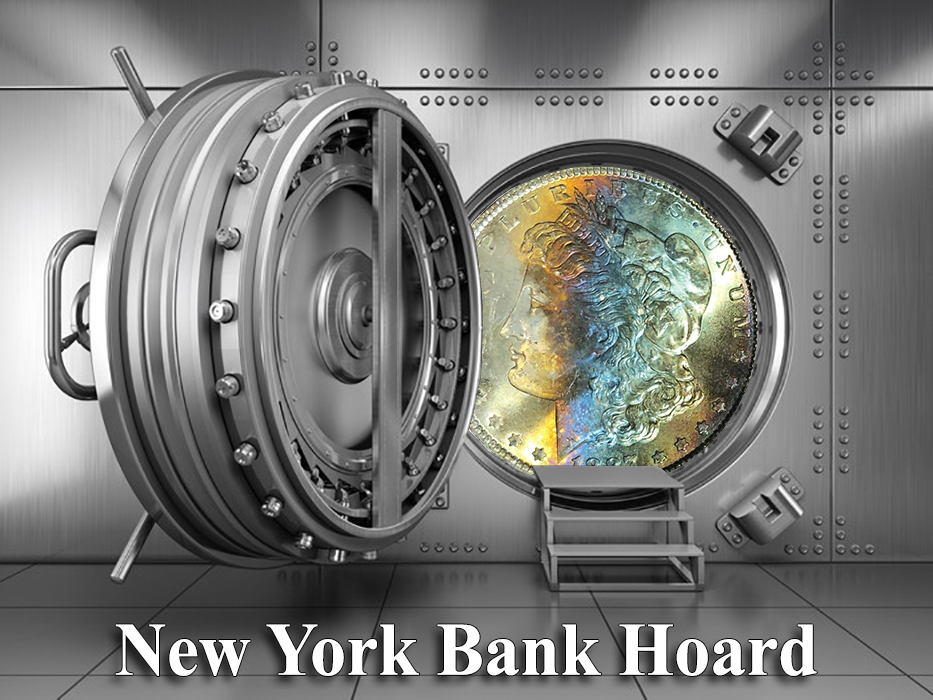 It is the dream of most coin collectors, to discover a hidden hoard of rare coins.  Now, imagine finding 16 sealed original U.S. Treasury bags containing 16,000 vintage Morgan Dollars! That dream came true recently with the discovery of a large hoard of Morgan Silver Dollars that were hidden away for over 50 years in Wall Street Bank Vault.

Recently, the heirs of their father’s secret silver stash, revealed the insistence of this hidden hoard that was untouched for over 50 years, ever since the 16 bags of Morgan Silver Dollars, were placed in a New York bank large safe-deposit box back in 1964.

This remarkably well-preserved hoard was virtually untouched for over half a century and boasts a number of high-grade pieces, including 118 that graded NGC MS 67. That alone is a remarkable find, but add the story how these rare Morgan Silver Dollars from the 1880s, escaped the U.S. Mint melting pots and survived uncirculated for over 130 years, is a tribute to 19th Century numismatics and is a major new chapter in the Morgan Dollar story. 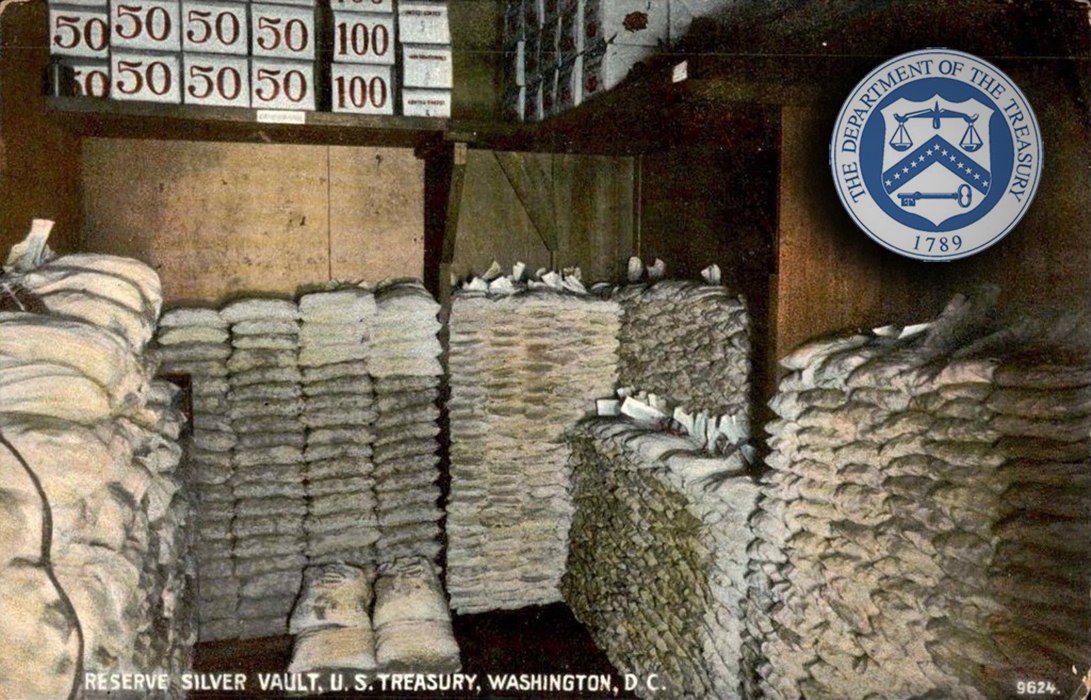 The story begins in November 1962, when a massive hoard of Morgan Dollars was discovered during an audit of the United States Treasury vaults. The government decided to allow an exchange of other currency for silver dollars, at face value. This caused a rush of eager buyers to stand in line at the Treasury Department’s main building, in Washington, D.C., where they could acquire up to 50,000 Morgan Silver Dollars each.

In 1963 alone, 31 million silver dollars were released, and another 25 million in just the first three months of 1964, before the Silver Dollars distribution was ended in March of 1964.  Shortly after that, the Coinage Act of  1965 drastically reduced the silver content in our nation’s coinage, making those Morgan Silver Dollars very desirable. During the U.S. Treasury sale in the early 1960’s, a Brooklyn New York Coin Broker, Edward’s Associates, who specialized in silver dollars, acquired a sizable number of sealed Morgan bags from the Treasury, containing 1,000 each.

The coin broker then resold the silver dollars to collectors and investors at that time.

One of those investors was a Wall Street Businessman who worked in the financial district in lower Manhattan. He was an immigrant who grew up during the Great Depression and valued physical money.

In 1964, he purchased 16 canvas bags from Edward’s Associates and rented a large safe-deposit box in a Wall Street bank vault for safe keeping. Over the next 54 years, the 16,000 coins remained absolutely untouched, until the family heirs decided to liquidate the Morgan Dollars in May 2018.

The son and daughter of the original purchaser no longer wanted to pay the $800 a month storage fees for the 3-foot by 3-foot by 4-foot safe-deposit box and decided to dispose of the hoard.  They contacted the well-respected Numismatist, Jeff Garrett, of Mid-American Rare Coin Galleries in Lexington, Kentucky, to evaluate and broker the sale. 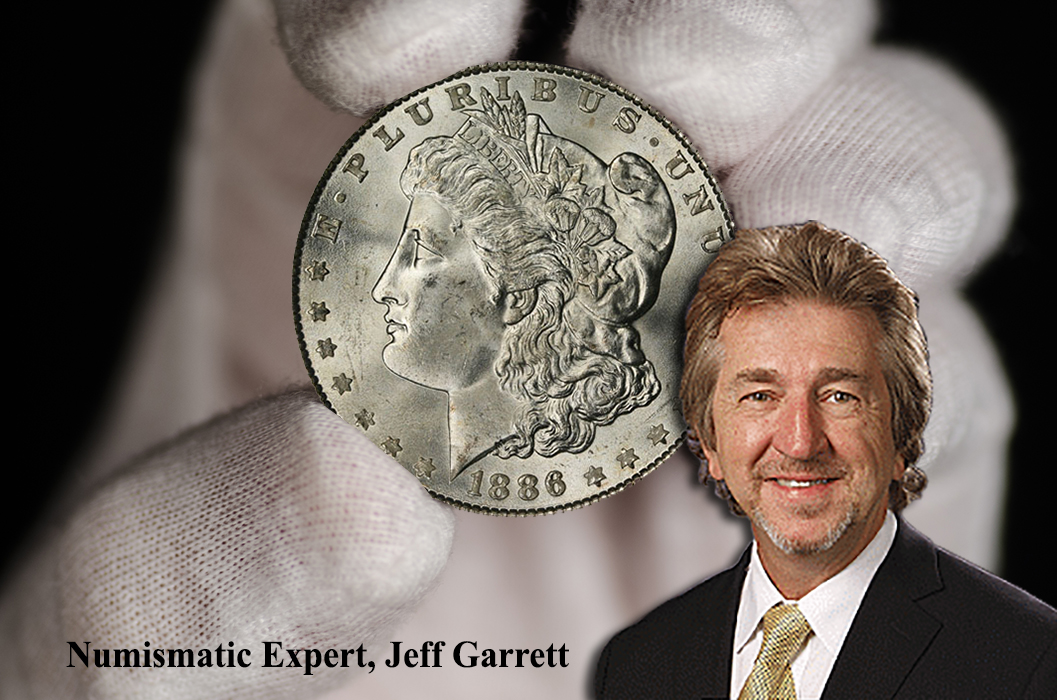 Jeff Garrett is considered one of the nation’s top experts in U.S. coinage, with more than 40 years of experience in rare coins. Jeff has had a passion for collecting coins since his youth when he joined the American Numismatic Association as an ANA Life Member in 1975. Ten years later in 1984, he founded Mid-American Rare Coin Galleries in Lexington, Kentucky, where he still serves as President today, and he is also the Co-owner of Sarasota Rare Coin Galleries in Florida. Jeff has been a member of the prestigious Professional Numismatic Guild (PNG) since 1982 and previously served as President, Vice President and Treasurer of the organization. In 2015, he was elected to serve at the 59th ANA President and currently plays an important role as a consultant to the Smithsonian Institution’s National Numismatic Collection in Washington DC.

Jeff Garrett is one of the numismatic industry’s top coin graders. Early in his career, he was one of the original coin graders for the Professional Coin Grading Service (PCGS), and today, he serves as a Special Projects Consultant to Numismatic Guaranty Corporation (NGC).  He has authored many of today’s most popular numismatic books, including the industry best seller, “100 Greatest U.S. Coins.”  Widely considered the “Experts’ Expert,” Jeff has personally bought and sold nearly every U.S. coin ever issued, making Jeff the logical choice to handle the historic New York Bank Hoard of Morgan Dollars. In May 2018, the unnamed heirs to the 16,000 coins reached out to Jeff Garrett for guidance and to evaluate the large Morgan Dollar hoard.  Over a period of three days, from May 28th to 30th, Jeff, his son, Ben Garrett, and, Mark Salzberg, NGC Chairman and Grading Finalizer, handled each of the 16,000 coins for initial evaluation of rarity and condition.

The 16 bags were carefully removed from the safe-deposit box to minimize additional “bag marks” then they may originally have had back in 1864. As the three men began to carefully open the original sealed U.S. Treasury bags, they quickly realized they were witnessing the revelation of a numismatic time capsule.  They were stunned to see coins were in such pristine condition, that they looked like they had just been minted, and the overall quality of the coins was simply amazing. Each coin was slowly removed from the canvas bags, with the best specimens placed into protective coin flips, while others were placed into coin tubes for transport. Once the coins were initially evaluated, Brink’s was hired to ship the hoard from the New York bank to NGC’s grading facility in Sarasota Florida.

NGC found a number of amazing Morgan Dollars, many with rich toning that only occurs naturally over time. The initial value of the hoard is estimated at $1 to $1.5 million, however, the actual value will be determined by the certified grade that each coin receives The graded coins were encapsulated with a special NGC certification label for the New York Bank Hoard pedigree. The coins in this hoard are listed separately in the online NGC Census, which identifies the NGC-certified population for each issue and grade.

Own a Piece of Morgan Hoard History 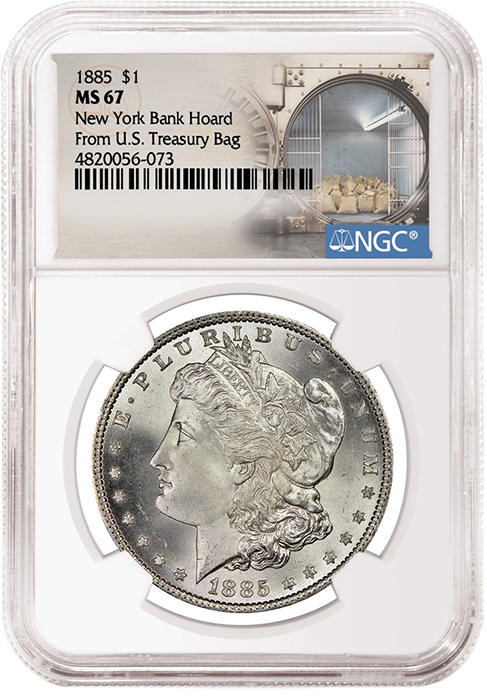 Over the last 50 years, there have been several major hoards of Morgan Dollars discovered. The most notable were the coins sold by the U.S. General Services Administration (GSA) from 1972 to 1980, as well as the vast hoard accumulated by the prolific hoarder, LaVere Redfield of Reno Nevada, which was discovered and dispersed following his death in 1974. Coins pedigreed to the GSA and Redfield hoards are highly desired by many collectors today.