A Brief History of the American Cent

As the lowest denomination circulating coin issued, the cent, which is the proper numismatic term for coins that many call pennies, was the first coin (along with half cents) struck by the U.S. Mint beginning in 1793. Made using hand-engraved dies, those first cents, as well as all the other types issued until 1857, are known as large cents and have a diameter similar to that of half dollars. The low face value of the first cents meant that they circulated widely, which helped to reinforce for the general population the idea that the American republic had arrived. 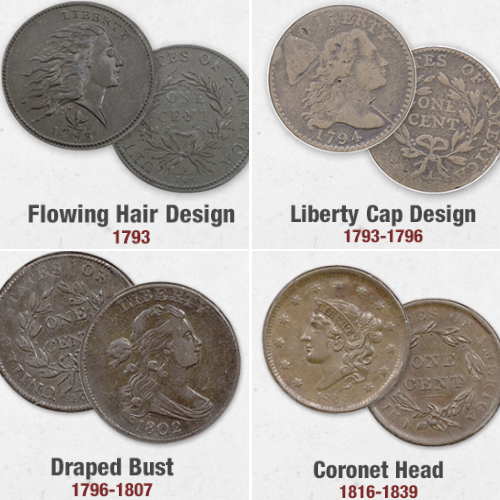 The first large cents are known as the Flowing Hair design (their obverse image), which had a chain reverse and were only issued from February 27 to March 12, 1793. They are very rare in any condition. Due to the hand-engraved dies, the details of Liberty on the obverse are often missing, while the reverse tends to be much sharper. The reverse was changed to a wreath design for the majority of the first large cents produced, which were struck from April 9 to July 17, 1793. Those cents tend to be fairly-well struck.

In the summer of 1793, a new obverse was created by artist and engraver Joseph Wright that is known as the Liberty Cap design, featuring Liberty still facing to the right and still paired with the wreath reverse. Issued until 1796, these coins did not use the hand dies of earlier issues, but instead were made using a punch for Liberty’s head and cap, which resulted in a more consistent appearance.

The design was changed to Draped Bust in 1796 and issued until 1807. The obverse design was based on a drawing by artist Gilbert Stuart and was first used on some 1795 silver dollars. These are the earliest cents that can still be found in nice condition at a reasonable price, making them appealing for type collectors and those trying to build full sets since only the 1803 coin is rare.

From 1808 to 1814 the Classic Head design by John Reich was produced with Liberty now facing left and wearing a headband inscribed with “Liberty” and surrounded by 13 stars (for the original colonies) still paired with the wreath reverse. Coins struck in 1812 during the second war with the British were of poor quality but got better after the War of 1812 by utilizing planchets imported from England.

From 1816 to 1839 the design was changed to Matron Head also known as the Coronet Head in which Liberty (designed by Christian Gobrecht) had the same basic motifs as on the Classic Head (except she wears a coronet with “Liberty” inscribed on it) but instead of looking fashionable, she now appeared matronly and more conservative. 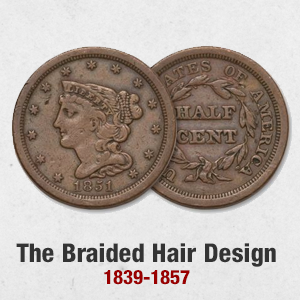 When the Braided Hair design debuted in 1839, Liberty was once again youthful in appearance. Issued until 1857, these coins are the final type of Large Cent and by far, the most common. There are also many die varieties for this issue. Based on the design for the 1838 gold half eagle, this design by Christian Gobrecht featured Liberty’s head tilted forward and her hair braided.  She still wears a coronet, and the wreath reverse was made larger.

Many of the types of large cents issued through the Braided Hair ones were unpopular with the public who did not like the way Liberty was portrayed on them, and they rarely circulated outside large cities. In addition, due to rising costs to manufacture and distribute the coins, especially with the advancements in minting technology, the face value was now less than the cost to make the coins. An 1857 law replaced these coins with a smaller, copper-nickel coin of the same value that weighed less than half as much as the old coins. The new small cents were much more popular and soon became favored for retail trade transactions. 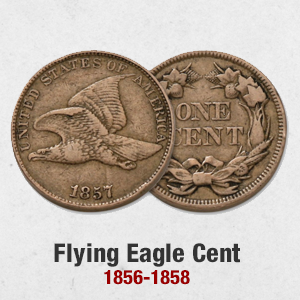 The first type of small cent was only issued for two years from 1857 to 1858, although patterns dated 1856 exist. This coin, a favorite of type collectors, is known as the Flying Eagle cent. It used the same design of an eagle in flight facing to the left by Christian Gobrecht which appeared on the 1838 silver dollar but was actually designed by Chief Engraver James Longacre. The reverse depicted an agricultural wreath around the denomination. There were problems striking these coins, so they were discontinued in 1858 and replaced in 1859 with the Indian Head cent. 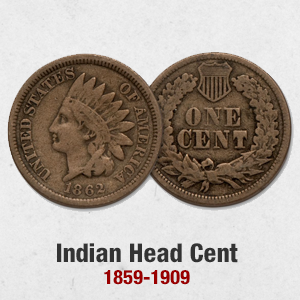 The Indian Head cent is called that because of its obverse design, which depicts Miss Liberty wearing an American Indian headdress. As Ron Guth and Jeff Garrett note in their book, United States Coinage: A Study by Type, at this time Native Americans had already had their ancestral lands taken from them and been relocated to reservations, making the image of Liberty in this fashion “a curious contradiction.” This obverse was used for all issues, while the reverse for the first year, 1859, featured a wreath surrounding the denomination.

In 1860 a Union shield was added to the reverse to symbolize the efforts of the federal government to keep the union intact at a time when southern states were threatening to secede over slavery. This design and the copper-nickel composition were used from 1860 to 1864.  In the face of the hoarding of copper and other coins that took place during the Civil War and the use of one-cent tokens, the government issued the Indian Head cent with the same design as the 1860-1864 coins but struck in bronze. This coin was issued through 1909 and produced at the Philadelphia Mint (like the previous Indian Head cents) except for 1908 and 1909, when they were also issued at the San Francisco Mint. 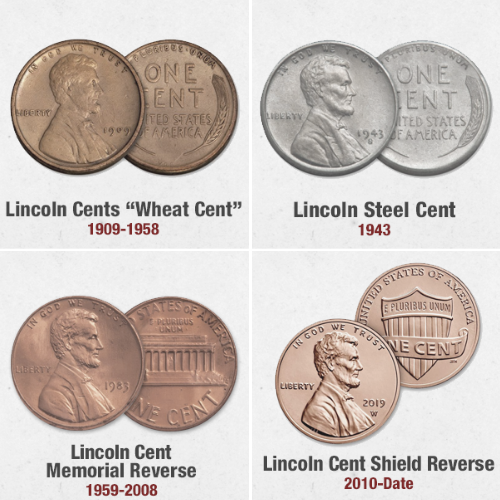 As the 100th anniversary of the birth of President Abraham Lincoln approached, President Theodore Roosevelt asked sculptor and engraver Victor David Brenner to create a coin honoring Lincoln as part of Roosevelt’s historic overhaul of American coinage at the time.

The Lincoln cent, which is the longest continuously issued American coin, debuted on August 2, 1909, and the earliest issues carried the artists initials, “VDB”) on the simple reverse with wheat ears surrounding the denomination with “United States of America” below and “E Pluribus Unum” above. This design continued until 1959, the coin’s 50th anniversary, when it was changed to one by Frank Gasparro of the Lincoln Memorial in Washington, DC -- erected in 1922.

The obverse, which has remained constant except for a slight change in 1982 to the lettering and bust, featured a right-facing profile of Lincoln with “Liberty” on the left and the year of issue on the right and for the first time the motto, “In God We Trust,” above the bust.

What has changed several times is the composition of the coin. From 1909 to 1942 it was struck in bronze, then in 1943 zinc-coated steel was used because copper was need for World War II. In 1944 the bronze alloy returned, and metal salvaged from gun-cartridge cases was used to make the cents.

The Lincoln Memorial reverse and original obverse continued until 2009 when four special cents were issued for the 200th anniversary of Lincoln’s birth that depicted on their reverses the famous president at different stages of his life.

In 1982 the composition was changed from bronze alloy to the copper-coated zinc still used today, which despite having little copper has seen its production and other costs rise to the point that it exceeds its face value. This has led to repeated calls to end the cent, and to efforts by the Mint to explore the use of alternative metals to produce the coin, but it is still being minted.

In 2010 a third reverse featuring a Union shield was introduced. It was designed by Lyndall Bass and sculpted by Joseph Menna and was intended to symbolize Lincoln’s legacy of preserving the United States as a unified country. The bust of Lincoln on the obverse was also updated on the 2010 coin and continues to be used, as does the Shield reverse.

Lincoln cents – of which billions have been minted -- remain enormously popular with collectors of all levels.