A Spotlight on the Royal Mint: Sovereigns, Britannias, and Beyond

The Royal Mint of the United Kingdom is one of the world’s oldest and most important mints with over 1,100 years of experience. It produces all the nation’s circulating coins, as well as bullion and commemorative coinage and medals. It has also minted circulating coins for over 100 issuing authorities around the world. 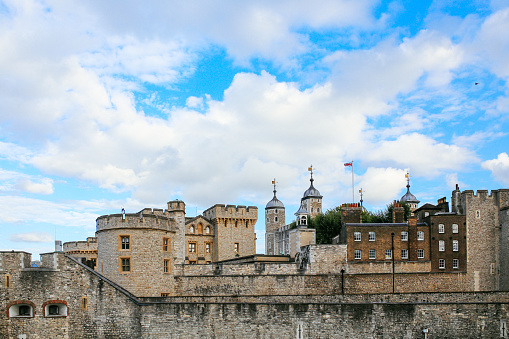 Coinage in Great Britain dates to the second century BC when Celtic tribes first introduced coins to the region. During the Roman rule of Britain, the Romans established mints all over the area, including in London, but that ended with the end of Roman rule.  No coins were made in Britain for the next 200 years, until the English kingdoms emerged in 650 AD.

At that time as many as 30 mints were set up in Britain, including in London, and control of those mints alternated depending on which tribe won battles for control of the land.

Alfred the Great regained London in 866 AD from a warring tribe and then started issuing silver pennies that featured his portrait. It is with those events that the Royal Mint dates its origin as a continuously operating minting facility. For the following 800 years the mint operated within the Tower of London and then moved to the Royal Mint court, where it remained until the 1960s.

In 1968, as the UK was preparing to introduce decimal coinage, Queen Elizabeth II opened the mint’s current facility in South Wales at a plant located in Llantrisant. It employs over 900 people. 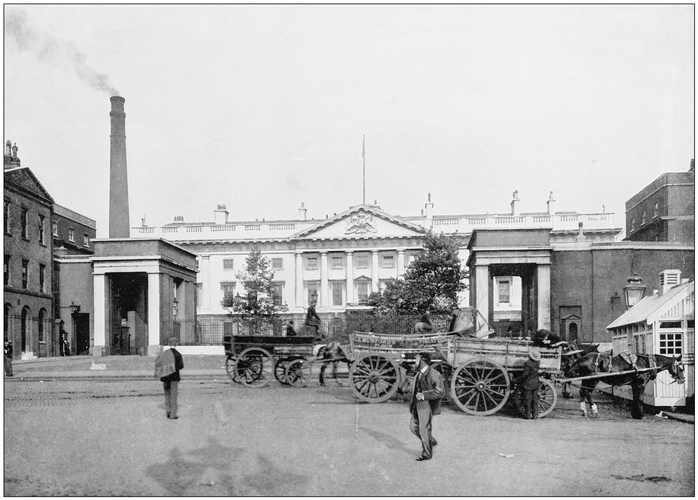 In 2009 the mint ceased being an agency of the British government and became a government-owned company called Royal Mint Ltd. that is owned by the British Treasury.  The mint pays an annual dividend of 4 million British pounds to the treasury, and the remaining profits are reinvested into the mint.

In 2015 George Osbourne, the Chancellor of the Exchequer announced a 20-billion-pound privatization drive, which paved the way for the mint to return to producing its own line of bullion bars and coins with its own refinery after a 50-year hiatus from making such products.

The Royal Mint publicized plans for Royal Mint Gold, a digital gold currency, in 2016 which would utilize blockchain technology (most commonly associated with bitcoin) to trade and invest in gold.  The mint plans to issue up to $1 billion worth of RMG with one RMG token being equal to one gram of physical gold. As part of the recent expansion of its bullion services, the mint also offers an online trading platform and storage services.

In recent years the mint has had to adapt to a rapidly changing environment in which the demand for circulating coinage has decreased sharply as consumers increasingly use alternatives to cash, and its bullion division has also saw reduced demand. This has put more pressure on the collector coin division to compensate for losses in the first two areas. In the 2017-18 period, the mint’s operating profit was 11.5 million pounds.

These changes have necessitated developing new business models and trying to increase the number of coin collectors. Two recent efforts in that regard that were very successful are the A to Z 10 pence circulating series that celebrates all things British with a different coin for each letter of the alphabet (which the mint’s CEO Anne Jessop noted in an interview was partly inspired by the U.S. Mint’s state quarter series) and the Beatrix Potter commemorative coins, which were also very popular, including with those who did not previously collect coins. 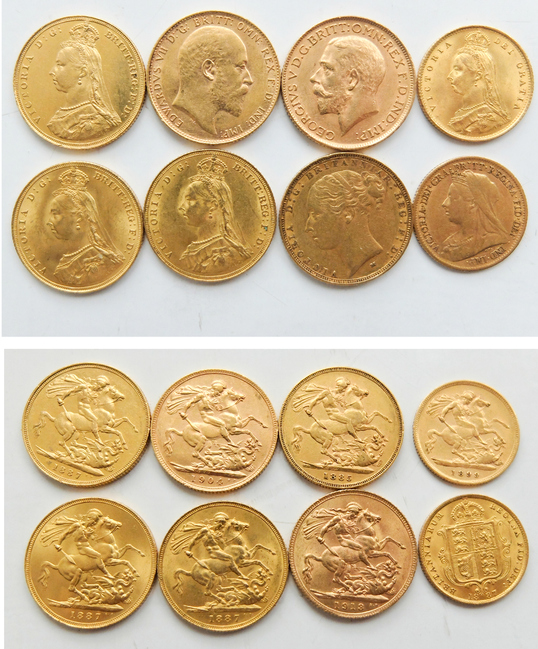 Historically, the most famous coins of the Royal Mint are gold sovereigns, which have been issued since 1817 with the reigning monarch on the obverse and an iconic design by Benedetto Pistrucci of Saint George slaying the dragon on the reverse.

Sovereigns were promoted by the Royal Mint for use in international trade and were also produced at colonial mints such as those in Canada, Australia, and India.  Their relatively small size and weight (7.98 grams or .2354 oz) also made them accessible to many buyers. Until the introduction of the South African Krugerrand in 1967, gold sovereigns were the most widely traded gold bullion coins in the world.

British coins are best-known for their royal portraits that appear on the obverse of all British coins as well as coins of the British Commonwealth. The most famous effigies are those of the two longest-reigning monarchs – Queen Victoria, for whom there were five portraits, and Queen Elizabeth II, for whom there are now also five portraits with the most recent being the one designed by Ian Rank-Broadley.

As far as Commonwealth coins, they do not all use the same effigy.  Some, such as Canada have their own one designed by an artist from their country, while others use the UK version, or another one altogether.

In the modern era, the mint first expanded into bullion coins with the launch in 1987 of the gold Britannia coin with a face value of 100 pounds.  As always, the monarch of the day appeared on the obverse, and an iconic image of Britannia, the female personification of Britain, appeared on the reverse.

Coins with an image of Britannia on the reverse date to 119 A.D. and were struck under Emperor Hadrian when Britain was part of the Roman Empire. The region was given the name Britannia by the Romans. The design then appeared for the next 300 years on the reverse of circulating British coins starting with copper farthings and half pennies of Charles II in 1672 until 1971, when decimalization began. 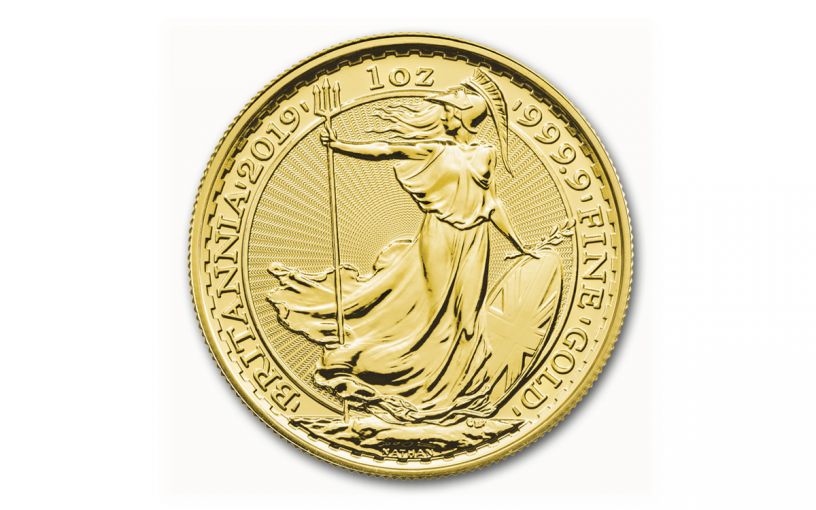 In 1997 the mint introduced a silver version of the Britannia and both versions continue to be minted, and widely collected, around the world. On most of those coins issued through 2012, a different image of Britannia appeared on each issue often with other motifs such as a trident, lion, Corinthian helmet or shield to emphasize the protective and reassuring nature of Britannia. In 2010 Britannia also briefly reappeared on a circulating 2-pound coin.

A new design has appeared each year on the Proof Britannia pieces made of silver and gold issued since 2013, many of which use more modernized images. Meanwhile, the bullion coins retain the same design every year by Philp Nathan showing her wearing a Corinthian helmet while holding a trident in one hand and a shield with the Union Jack flag in the other. Britannia proofs until 2012 carried the same designs as the bullion versions for those years.

There are also versions issued for the 30th anniversary of the gold Britannia and 20th of the silver Britannia in 2017 that feature a special privy mark. In addition, silver and gold coins with an oriental border pattern have been issued since 2018 , which also have a limited mintage and are issued in proof finishes.

In 2014 the mint added silver and gold Chinese Lunar New Year-themed coins with a new issue each year.

In 2016 the mint launched the highly popular Queen’s Beast series of silver, gold, and platinum coins in a wide range of sizes with two new designs per year for five years. The series honors the heraldic traditions and history of the British monarchy. Queen’s Beast coins are issued in 2 oz. and 10 oz. silver; ¼ oz. and 1 oz. gold. as well as in proof finishes.

Conclusions About the Mint

The popularity of British bullion coins around the globe is a testament to the craftsmanship and quality of the mint’s products and to the global resonance of British symbols, history, and traditions.

The mint also issues a wide range of collector coins made of silver, gold, and base metals on themes such as royal weddings and births and many others. Many of these have been very popular such as the recent Tower of London coins and others. The mint also makes other items such as medals and jewelry.

Michael Alexander, “An interview with Anne Jessop of the Royal Mint, www.coinupdate.com, Nov. 29, 2018