Coin collecting tends to appeal to a rather narrow audience, much like any other hobby, but that does not mean that coins are forgotten by the rest of society. Aside from serving as media of exchange, coins are also central in cultural traditions throughout the world. In fact, finding cultures that do not have some sort of traditions involving coins is rather difficult.

Coins are incorporated into wedding rituals throughout the world. One of the most basic and clearest examples of this is the Irish tradition of a wedding day coin presentation. The groom gives his bride a coin while saying, “I give you this as a token of all that I possess.” This beautiful gesture encapsulates marriage perfectly, indicating that the groom is giving himself to his wife entirely; two become one.

Across the Irish sea in Britain, there are two more popular wedding-related traditions. One of them comes from a traditional rhyme, of which the last line is often forgotten. “Something old, something new, something borrowed, something blue, and a silver sixpence in her shoe.” The bride’s father traditionally places a sixpence in the bride’s shoe as a symbol of his wish for luck, wealth, and happiness for the new couple. 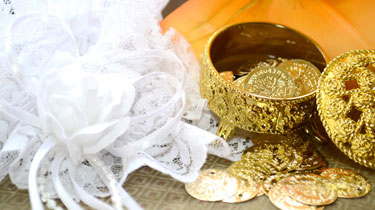 Wales has its own wedding tradition as well. A Silver Coin is set into a champagne cork. After the ceremony, the couple receives the coin as a souvenir.

Lithuania has one of the most unique traditions. Guests bring coins with them to the reception and throw them on the dance floor. The initials of the bride and groom are on one of them. After the first dance, the members of the wedding party collect the coins. The groomsman or bridesmaid who finds the initials coin then enjoys a dance with the bride or groom.

Another unique coin-related wedding tradition takes place in Turkey. There, it is customary for attendees to give gold coins to the couple and pin them on the bride’s dress. Coins are small, medium, and large, and the size of the coin given correlates to the relationship of the giver to the couple. The larger the coin, the closer the relationship.

Coins also play a role in Hispanic wedding traditions. During the ceremony, the priest blesses wedding coins, which the groom then gives the bride. When he gives her the coins, the groom pledges to take care of his wife and their household. Upon receiving them, the bride makes a pledge of her own to be a partner and use the gifts that she received to meet the needs of their household.

Christmas is another time that coins feature prominently. In fact, one of the oldest Christmas traditions, the hanging of stockings by the chimney, is said to have a related backstory. As the legend goes, St. Nicholas was wandering through a town and overheard people discussing the situation of a man who had recently been widowed. He was struggling financially, so he worried that he may not be able to afford the dowry of his three daughters, which would mean that they would be single for their entire lives. Knowing that the widower would never accept charity, Nicholas climbed down the man’s chimney at night and filled the girls’ stockings, which had been hung out to dry, with gold coins, solving the man’s problem. 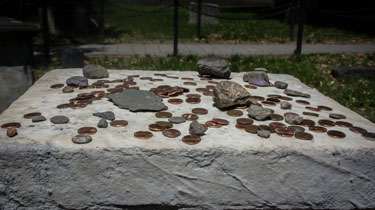 Although it is among the youngest of coin traditions, perhaps none is taken more seriously than the one related to challenge coins. There are several accounts as to the origins of the challenge coin, with the oldest going back to World War I. As the story goes, a well-to-do lieutenant ordered several bronze medallions for the members of his unit. He gave one to each and kept his own around his neck in a leather pouch. His plane was shot down shortly thereafter, and after his capture the Germans took from him everything that he could use to identify himself, except the medallion. He escaped from captivity and found a French outpost. The French were suspicious of him and considered executing him, but he managed to use his medallion to prove his identity. Another account suggests that they replaced other forms of proof of combat during the Vietnam War.

The precise origins of the tradition are unclear, but what is known is that the coins today are among the top representations of the service and experience of military leaders. Those who have served and those currently serving often display them in their homes or on their desks at work. Among the things that the coins represent are offices, units, special events, and anniversaries. Some are even made for individuals.

One of the most touching traditions didn’t originate with coins at all, but coins are now the most commonly used. For centuries, Jews have placed stones on gravestones when visiting the gravesites of their loved ones. There are religious roots to the tradition, but for many it is more a cultural tradition than a religious ritual. Today, coins are often placed upon gravestones, and not only by Jews, as indications that someone who cared about the deceased had visited the site.

While the coins that are used in commerce are often overlooked or taken for granted as people go about their daily lives, it is clear that they are much more meaningful in popular culture, and not just for hobbyists. Unlike paper, which withers, or other items, which can be cumbersome, coins are enduring and convenient. They offer people ways to mark their lives and the important events in them. They serve as symbols and traditions, connecting past with present and people with experiences and each other in ways that nothing else can.