Single events seldom define generations, and in the rare cases that they have, they’ve typically been World Wars. In one case, though, a four-day concert did just that. Named for Woodstock, a town located 43 miles from where the event took place, the festival was advertised as “3 Days of Peace & Music.” Fifty years later, it remains so much more than that to those who attended.

The event started as the brainchild of Michael Lang, Artie Kornfeld, Joel Rosenman, and John P. Roberts. The four, a combination of entrepreneurs and lawyers, had major clashes in style that, along with various challenges, threatened to end the project. One of those challenges had to do with the venue. The first planned site was in Wallkill, New York, but the town’s residents protested successfully to stop it. Just a month before the event, the organizers changed the venue to the dairy farm of Sam Yasgur.

Yasgur’s farm offered a sloping bowl shape that led down to Filippini Pond. Many concert goers used the pond for skinny dipping during the festival. The pond was the backdrop for the stage, which was set up near the bottom of the slope.

Thanks to the late change in venue and related expenses, organizers, who were expecting about 50,000 people, were running low on funds. They were forced to choose between finishing the stage and finishing the fencing, without which attendees could simply walk into the venue. They chose to finish the stage, which effectively made the concert free and nearly bankrupted the organizers.

Instead of the estimated 50,000 that were expected, estimates range from 400,000-500,000 attended. As expected, those without tickets simply walked onto the venue. This created a logistical nightmare, with insufficient sanitation and food. Adding to the potential problems was the inclement weather, which made for muddy grounds. After the event, Yasgur spoke of the potential for nightmarish scenarios, such as looting, but how the crowd simply enjoyed the music and thought about peace.

Another challenge that the organizers faced was signing talent. That changed in April when Creedence Clearwater Revival signed the first contract of any performers at just $10,000. After that, the concert became a virtual Who’s Who of the music world. Notable performances included Ravi Shankar, who played as it rained, and Joan Baez, who was six months pregnant. Santana, the Incredible String Band, the Grateful dead, Janis Joplin, the Who, Jefferson Airplane, and Jimi Hendrix were among the other stars who entertained. Hendrix was the last act and didn’t perform until Monday morning. Though he played in front of a much smaller crowd of just 30,000, his psychedelic performance of the national anthem became a signature moment not just of the festival but of the 60’s.

While the list of performers was plenty rich in big names, there were some notable absences. The Beatles, the Rolling Stones, the Doors, Chicago, Bob Dylan, and Led Zeppelin all either declined invitations or cancelled in advance of the festival. The Doors in particular regretted that decision. Jethro Tull gave one of the more interesting decisions for declining the invitation, saying, "[I don’t want to go] because I don’t like hippies, and I’m usually rather put off by naked ladies unless the time is right. Well, indeed, unless the money’s right.”

The festival was memorialized in the documentary film Woodstock, which was released the following year, and two soundtrack albums, Woodstock: Music from the Original Soundtrack and More, and “Woodstock 2.” It was the film and recording rights that made the event profitable for its organizers. Without them, they would have been close to bankruptcy. A far cry from the sex, drugs, and rock and roll of the festival, the festival has also been memorialized in Charles Schultz’s Peanuts, as he named the bird character after the festival.

Time of the Season

Woodstock’s idealism and music live on today. They continue to define their generation, which changed history. For the four days of the festival, those in attendance lived up to their ideals of peace and love in spite of loads of logistical excuses not to do so. Those who attended and those who attended in spirit continue to see the festival as the embodiment of their ideals and an outstanding display of their favorite music.

GovMint.com now celebrates the 50th anniversary of the festival with three new offerings for collectors. One is a five-piece set with the coins that the US issued for circulation in 1969. This includes a Kennedy half dollar, as well as a Washington quarter, a Roosevelt dime, a Jefferson nickel, and a Lincoln cent. The coins come set in a display case that bears the words “Woodstock Tribute Set” along with flowers and a peace sign, which has a guitar neck as the center line. Coins in the set may well have been at the festival themselves. 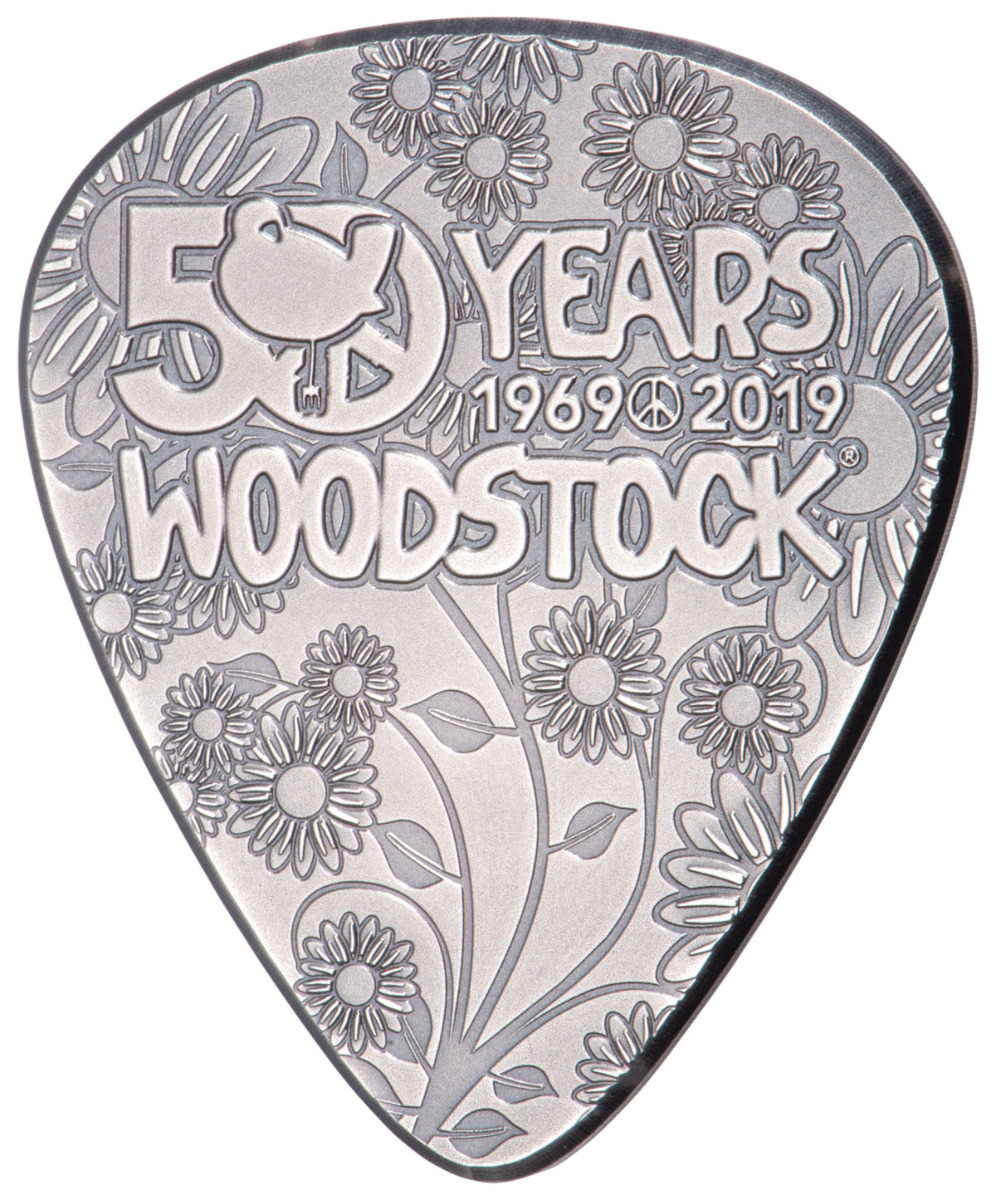 Two 2019 issues from the Cook Islands are also available from the Mayer Mint. One of them is a guitar pick struck from a quarter ounce of .999 fine silver, the perfect piece to memorialize a rock & roll event. It bears the inscriptions “50 YEARS OF WOODSTOCK 1969-2019” among flowers, a dove, and a peace sign. Fittingly, just 1,969 pieces were struck. The other Mayer Mint issue is a silver replica Woodstock ticket. Struck from about 1/5 oz of .999 fine silver, the ticket bears mostly the same designs and inscriptions as an original ticket to the festival. Space was, however, left for Ian Rank-Broadley’s portrait of Queen Elizabeth II and a few statutory inscriptions. The ticket has the same mintage as the pick. 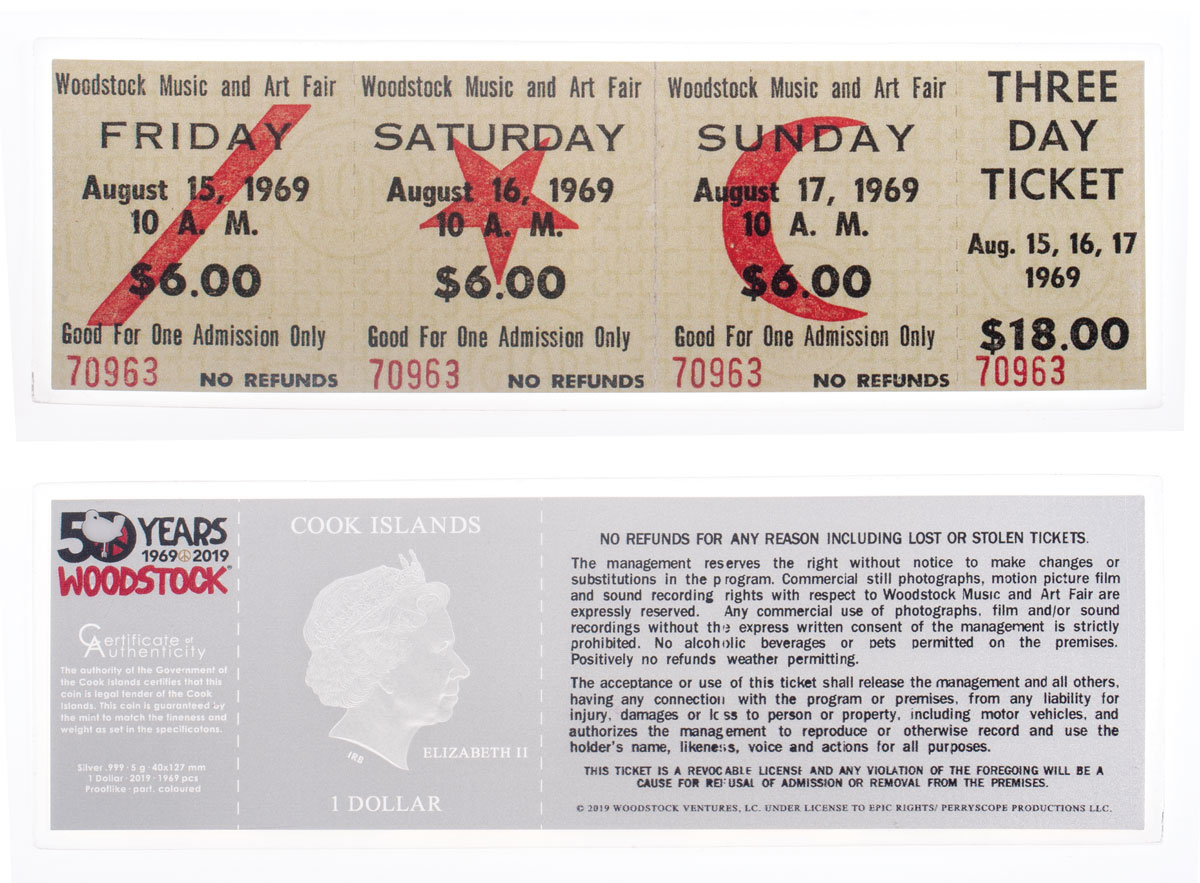 For hippies and hippies at heart, Woodstock was a time of idealism and fantastic music. It came to serve as a symbol for the radical change of the 1960s. Even those who dislike the music and oppose the ideals that the event embodied can’t help but recognize the its significance. Consider adding one or more Woodstock-oriented pieces to your collection to share in the 50th anniversary commemoration of one of the most significant events in music and American cultural history.