Mintages of popular coins vary widely based on a variety of factors, such as demand and the availability of metals. Depending on the coin, some mintages can range from hundreds of thousands to several million pieces. Occasionally, though, mintages of otherwise popular coins are at levels substantially below the usual swings. Here are a few examples of issues of coins that are notable for especially low mintages and the circumstances surrounding those issues.

Arguably the most popular coin in the history of American numismatics, the Morgan Silver Dollars reigned supreme from 1878-1904. Although commonly used in daily commerce during their run, Morgans remain popular among avid and casual collectors alike, with many being passed on as heirlooms for generations. With a smattering of exceptions of releases from individual Mints, most Morgan issues went well into the millions. That is except for the period from 1893-1895. In 1893, Congress repealed the silver purchasing clause that was in the Act of July 14, 1890. The repeal meant that the Mint could no longer purchase new silver to mint Morgans. Production of the coin immediately stopped at the Philadelphia Mint, capping its issue at 378,000. 1894 and 1895 produced even lower mintages from Philadelphia, with just 110,000 released in 1894 and 12,000 produced in 1895, though it is believed that all of the 1895 strikes were melted down since none have ever been seen. Mintages from the other Mints were also low for those years, most notably with the 1893 San Francisco issue of just 100,000 pieces. That 1893-S issue is difficult to find today, even in low grades.

The Liberty Double Eagle has some even lower mintages, none smaller than the 1849 pattern, of which only one is known to have been struck. There have been rumors of a second, though. In terms of regular issues, the lowest number came in 1882, when just 571 were released from the Philadelphia Mint. At the time, the responsibility of producing Liberty Double Eagles was shifting west, especially to San Francisco but also to Carson City. In the run up to 1882, San Francisco Mint had already been handling the bulk of production. In 1880 and 1881, the Carson City Mint did not produce any of these coins, but in 1882, their production went to 39,140, minimizing the need for supplementary production from Philadelphia in 1882 and eliminating it entirely for 1882 and 1883. To this day, the 1882 Liberty Double Eagle is one of the most difficult coins for collectors to obtain, with only about 25 known to exist, and none in higher grades than MS62.

One of the smaller coins with an exceptionally low mintage of note is the 1872 three cent silver. Three-cent pieces were issued from 1851-1889, though 1872 was the last time that the coin was issued in silver. With just .75 grams of silver, this tiny coin is a big find for collectors, thanks in no small part to its low mintage of just 1,000 pieces and the circumstances surrounding its demise. The coins that were issued were almost all used in commerce, which is why Mint State examples are rare. 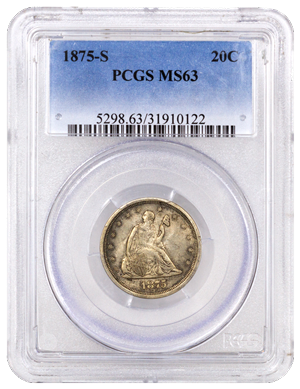 Why wouldn’t collectors have saved these coins with such a low mintage and with them being the final issue? Collectors did not know that it would be the final issue. Congress passed the Mint Act of 1873, which ended production of three-cent silver pieces on April 1, 1873. Production of these coins stopped immediately, rendering these small pieces that were used to conduct daily transactions immediately more valuable as collector pieces. Although the legislation that ended production of these coins has obvious implications for collectors, it had a much wider impact on the economy as a whole. Specifically, it ended bimetallism – a system in which the money standard was based on gold and silver – and put the United States on the gold standard.

Not all low mintages have to do with legislation or logistics. The 1879 Seated Liberty Dime, for example, had a low mintage simply because it wasn’t needed at the time. There were already more than enough dimes in circulation to satisfy the needs of commerce, so Mint Director Horatio Burchard decided to Mint a low number to give collectors the opportunity to get dimes at face value. 14,000 pieces were released, most of which were snatched up by speculators. Over the next two years, the Mint followed the same practice, albeit with not quite as few pieces, 36,000 and 24,000, respectively, before returning to normal practice with a little over 3.9 million new dimes in 1882. As a result, uncirculated pieces are abundant, while circulated examples are relatively rare.

These are just a few examples of coins that are issued for circulation but that end up having particular interest for collectors due to their low mintages. In some cases, the causes simply have to do with the time and circumstances, while in others the exceptional numbers are the result of significant historical events. In all cases, though, the stories surrounding the notable mintages offer fascinating windows into history that is all too often forgotten.