The American Numismatic Association’s (ANA’s) National Coin Week dates back nearly 100 years to 1924. Each year, a new theme provides a fresh opportunity for collectors to celebrate their favorite pastime and explore the history, present, and future of numismatics. The consistency of the ANA in promoting the event, which has run through the Depression, a World War, and other national crises, is a testament to the organization’s dedication to growing the hobby. Today’s collectors owe a debt of gratitude to those who have contributed to this rich tradition over the years.

In the early 1900s, the world of numismatics faced an ethical crisis. Julius Guttag outlined it beautifully:

"Years ago the dealer gave freely of his knowledge and endeavored to educate the new collector as much as possible. Today, many dealers make it their aim to keep the collector uninformed… If each and every dealer would show a live and honest interest in every new collector, encouraging him to join [the ANA], and perhaps the local numismatic club, I am sure it would not be very long before a very live interest in numismatics would be revived.” 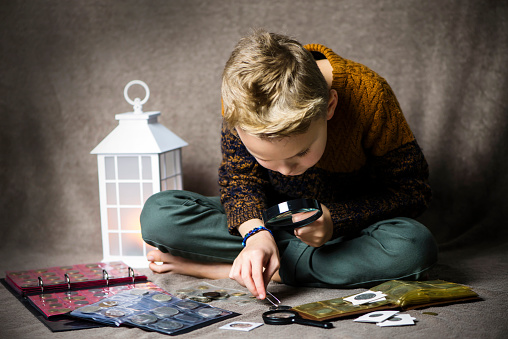 The ANA was committed to finding ways to solve this problem and to promote coin collecting more broadly. In 1924, the organization held the first National Coin Week, which has become an annual event. The undertaking expanded in 1941 when efforts were undertaken to create public displays of coins, paper money, medals, and tokens that would be displayed in banks and store windows to publicize the hobby. Those efforts continue to this day.

Each year throughout its storied history, National Coin Week has featured a theme designed to attract and inform people with interests in different aspects of numismatics. For example, in 2004 National Coin Week encourage collectors to Explore the World Through Money. The theme attracted many casual collectors, as well as some non-collectors, who are interested in different countries and cultures to take a closer look at money from different parts of the world. In 1996, the organization pointed out that coins of times gone by are History in Your Hands. That year emphasized ancient coins, especially those connected to significant ancient civilizations, such as Rome and Greece. Within the past three decades, three themes have even been repeated: Discover New Worlds Through Coin Collecting (1992-1993), Coin collecting: The World’s Largest Treasure Hunt (1994-1995) and Faces of Time (2001-2001).

2019 National Coin Week "Discover the Past, Envision the Future"

This year, National Coin week runs from 4/21-4/27. This year’s theme is Discover the Past, Envision the Future. The celebration features a Daily Online Trivia Challenge that will consist of questions on social media and money.org, as well as a design contest for a coin to be released in 2069. The contest invites collectors to use their talents and create a coin that celebrates an important invention or discovery of the next half century.

In 2019, National Coin Week is getting a boost from the U.S Mint, which just in advance of it released ten million coins with the first ever “W’ mint mark quarters issued for circulation. The coins combine various appeals of coin collecting – the hunt for the needles in the proverbial haystack with just 10 million bearing the mint mark out of over a billion 2019 quarters, the joy of making the discovery, the history of several of the reverses, which honor those who gave all for their countries, and the experience of holding one of these pieces.

Background on the ANA

The organization that continues to bring National Coin Week to new generations was founded in 1891 by Dr. George Heath, John Brydon, David Harlowe, J.A. Heckelman, and William Jerrems, who held 26 proxies. Consisting of 61 charter members, the organization was founded on Heath’s vision, which is best summed up in something he wrote in the publication The Numismatist in 1891: “There is nothing like the alliance of kindred pursuits to stimulate growth and interest.” That vision was not limited to his time. Of the young organization, he said, “The foundation of the ANA was not laid for today alone but for the long and distant future as well. Each member can do a little in contributing to its success.”

Today, the organization, which is the largest nonprofit numismatic organization in the world, continues promoting coin collection and education in a variety of ways, including National Coin Week. It also hosts the World’s Fair of Money and the National Money Show, which offer collectors the opportunity to come together to share their passion. These conventions are also show cases for important coins new and old. They are the only opportunities that some collectors ever have to see some of the world’s most valuable coins. Some mints even release special issues specifically minted to celebrate the events.

Almost a century after it began, National Coin Week continues to carry out its mission of introducing numismatics to those not currently engaged in it, educating collectors, and inspiring collectors to explore new aspects of one of the world’s oldest and most fascinating undertakings. With new coins circulating for the general population and contests that look to the past and the future, this year’s celebration looks certain to be yet another success. Collectors of all stripes owe a debt of gratitude to the ANA for its dedication to the promotion of one of the world’s most intriguing hobbies.