The Brasher Gold Half Doubloon 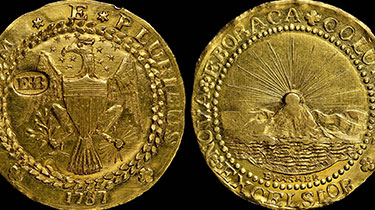 The Brasher Gold Half Doubloon was America’s first gold coin and a true national treasure.  The tale of how this amazing gold coin came to be is filled with history, mystery, and the “can-do” attitude and ingenuity of our Forefathers.

Origins of the Brasher Half Doubloon Gold Piece

Two men were neighbors in New York City in 1787. One lived at Number 5 Cherry Street, the other man lived right next door. One of them was a famous gold and silversmith, Ephraim Brasher. The other was George Washington, hero of the Revolutionary War and soon to be the first President of the United States.

In fact, Washington and Brasher were more than neighbors. They knew each other well, and were, perhaps, friends. Washington admired his neighbor’s skills so much he purchased silver items made by the smith to adorn his home and used them later as President in Philadelphia, then at Mount Vernon. Brasher was so well-known and respected that when folks had a gold coin and they weren’t sure it was real, they would sometimes bring it to him for testing. If it was real, he would stamp his initials “EB” in an oval on the coin.

Then, everyone knew it was real.

Washington was passionate about the coinage for the new U.S. He felt the coins we carry in our pockets should represent the ideals of our country. Later as President, he had an enormous influence of the designs of our coins, insisting on images of Lady Liberty, rather than images of real men. To show his support, he even donated silver to strike the first coins at the U.S. Mint.

Brasher was passionate about coinage for the new nation as well. So passionate, that he had his goal set on designing the first gold coin for the nation. And who better to talk to about it than his neighbor?

Did Washington and Brasher spend long winter evenings in front of the fire in each other’s Cherry Street homes, sipping fine French brandy and discussing what types of coins and what designs should be used? No one knows for sure, but it’s certainly possible, and, in 1787, Brasher fulfilled the dream when he designed and struck the first American gold coin. It’s known as the Brasher Gold Half Doubloon.

The coin shows an eagle with a breast shield, with arrows clasped in one claw and an olive branch in the other. If it looks familiar, it should. The image is the basis for the U.S. Presidential Seal and has been used on U.S. coins for over 200 years. And just to make sure no one could mistake his work, Brasher stamped his initials “EB” in an oval on the eagle’s right wing.

Now, the new nation had its own gold coin, and everyone knew who made it.

Brasher struck his gold doubloons in 1787 and the coins entered circulation at the dawn of our nation, fueling commerce. No one knows how many he struck, but only one Gold Half Doubloon survives.

Many different gold coins were legal tender in the U.S. at the time, and often folks would bring old gold coins to the mint and exchange them for new U.S. gold coins. And, believe it or not, the U.S. Mint had its own coin collection! It’s known as the Mint Cabinet. If someone exchanged an important gold coin at the Mint and it wasn’t in the collection, the Mint would save it and place it in the Mint Cabinet. After passing through many hands back in the day, someone eventually brought the Brasher Gold Half Doubloon into the Mint and it was saved in the Cabinet.

The Mint Cabinet collection was donated to the Smithsonian Institution in 1922.