Which Coins Qualify for My IRA?

The Taxpayer Relief Act of 1997 allows you to invest any bullion coin into your IRA. In addition to Silver, Gold and Platinum Eagles, which are mentioned specifically, the law allows you to include “a coin issued under the laws of any State,” (meaning any nation).

For detailed information, please refer to these websites: 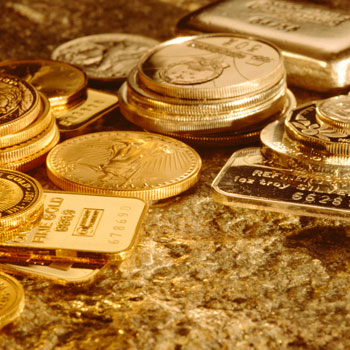 (a) In General.--Paragraph (3) of section 408(m) (relating to exception for certain coins) is amended to read as follows:

"(3) Exception for certain coins and bullion.--For purposes of this subsection, the term `collectible' shall not include--

(7) A fifty dollar gold coin that is 32.7 millimeters in diameter, weighs 33.931 grams, and contains one troy ounce of fine gold.

(8) A twenty-five dollar gold coin that is 27.0 millimeters in diameter, weighs 16.966 grams, and contains one-half troy ounce of fine gold.

(9) A ten dollar gold coin that is 22.0 millimeters in diameter, weighs 8.483 grams, and contains one-fourth troy ounce of fine gold.

(10) A five dollar gold coin that is 16.5 millimeters in diameter, weighs 3.393 grams, and contains one-tenth troy ounce of fine gold.

"(iv) a coin issued under the laws of any State, or

"(B) any gold, silver, platinum, or palladium bullion of a fineness equal to or exceeding the minimum fineness that a contract market (as described in section 7 of the Commodity Exchange Act, 7 U.S.C. 7) requires for metals which may be delivered in satisfaction of a regulated futures contract,

if such bullion is in the physical possession of a trustee described under subsection (a) of this section."

Most tax experts suggest that you keep a diversified retirement portfolio that includes gold, silver and other precious metals. Fortunately, the Taxpayer Relief Act of 1997 legally allows you to include a wide range of bullion coins and precious metals in your IRA or other self-directed retirement account.

In order to be acceptable for inclusion in a retirement account, a bullion coin or bar must be manufactured by an official government Mint (in the case of coins) or an approved refiner (in the case of bars).

The most popular coins in retirement accounts are Silver Eagles, Gold Eagles and Platinum Eagles struck by the U.S. Mint. Silver Eagles are made only in a one-ounce size, while Platinum and Gold Eagles are struck in one-ounce, half-ounce, quarter-ounce, and tenth-ounce sizes. As a result, the coins are convenient to own and can be inexpensive to buy.

Since 2008, the U.S. Mint’s American Buffalo Gold Bullion Coins have also joined the family of coins that can be included in a retirement account. These coins are made in the same four sizes as the Gold Eagles. 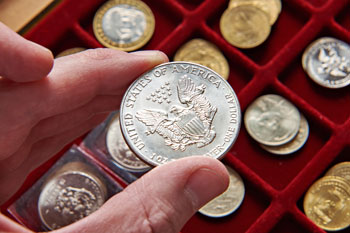 Platinum Eagles as well as Canadian Platinum Maple Leafs, Australian Platinum Koalas, and Isle of Man Platinum Nobles can be added to a retirement account.

When you add bullion coins to your IRA or similar retirement plan, the purchase is treated like the purchase of stocks or other commodities. The money you invest can be deducted from your income, and gains are exempt from capital gains tax.

Before purchasing any bullion coins for an IRA or other retirement account, always consult a tax expert to make sure you understand the risks and that are adhering to the most current rules and regulations.