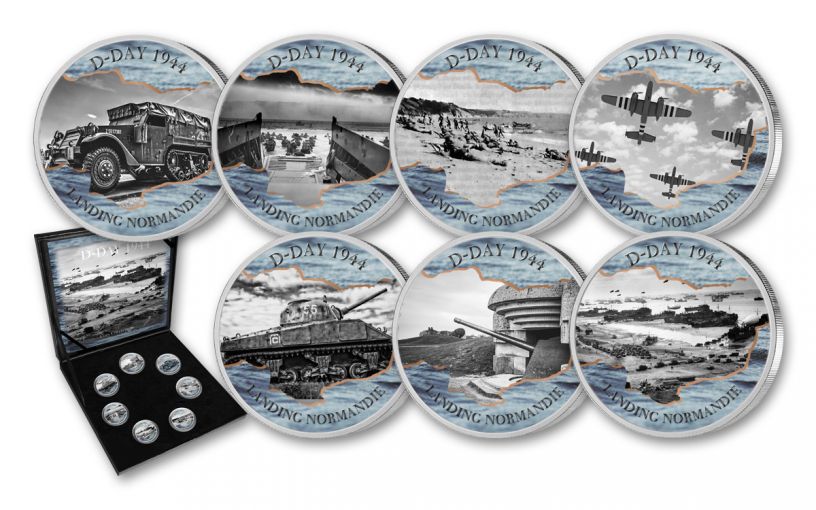 Availability: In Stock
This item will ship within 2 business days.
Item #
356782
Add to Wish List Add to Wish List Wishlist is for registered customers. Please login or create an account to continue. Add to Compare

Colorful Collection Pays Tribute to the Heroes of D-Day

On D-Day, June 6, 1944, more than 150,000 Allied troops successfully stormed French beaches in Normandy and created a beachhead from which they would launch a campaign that expelled German troops from France and begin the process of liberating Europe from the Nazi’s so-called Third Reich. Code-named Operation Overlord, by the end of June, the Allies had landed around 850,000 troops and 150,000 vehicles, fought their way across the French hedgerow country, and captured the vital port of Cherbourg.

Today, the battle fought more than 75 years ago during World War II is rightly remembered as the Allied victory that signaled the beginning of the end of Adolf Hitler and Nazi Germany. Spearheaded by Supreme Allied Commander American General Dwight Eisenhower, it was a remarkable achievement in logistics, organization, planning and subterfuge that coalesced into the largest seaborne invasion in history.

Now you can pay tribute to the decisive battle with this spectacular seven-piece set of cold enamel medals that commemorate the battle’s significant people and events. Cold enamel is a pigmented epoxy resin which gives the effect of enamel without the use of high temperatures. The resulting finish is attractive, durable and resistant to the wear of frequent handling.

The designs in this colorful set feature such unforgettable events as the beach landing on bloody Omaha Beach, depicting Robert F. Sargent’s famous Into the Jaws of Death photograph of American GIs from the 1st Infantry Division – The Big Red One – wading ashore from a LCVP (Landing Craft, Vehicle, Personnel) while under fire. Other designs feature aircraft, tanks, trucks and Nazi defensive pill boxes that rained deadly fire upon American troops at Omaha Beach.

This comprehensive set is an absolute must-have for students and aficionados of World War II. Secure one for yourself or for anyone on your list that would appreciate the monumental history represented by this colorful collection.