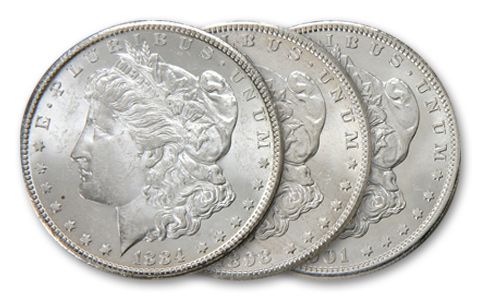 Availability: Out of Stock
This item is currently Out of Stock. Please sign up to be notified if this product becomes available.
Item #
228868
Add to Wish List Add to Wish List Wishlist is for registered customers. Please login or create an account to continue. Add to Compare

Morgan Silver Dollars From the Heart of Dear Old Dixie

In the early 1800s, New Orleans was vital to the U.S. economy due to heavy commerce on the Mississippi and throughout the Gulf of Mexico. In fact, all of the nation's commerce west of the Appalachian Mountains moved on streams that led into the Mississippi, and almost half of the nation's produce passed through New Orleans to market. Steeped in history, the New Orleans Mint produced some of the most desired Morgan Silver Dollars in the entire series. Now you can acquire three O-Mint Morgans from three of the four decades the "Dixieland Mint" struck the coin. You'll receive an 1884-O Morgan, 1898-O Morgan and a 1901-O Morgan - each in stunning Brilliant Uncirculated condition. These "O" Mint Morgan Silver Dollars still remain among those most prized, and have always been especially popular in the South.