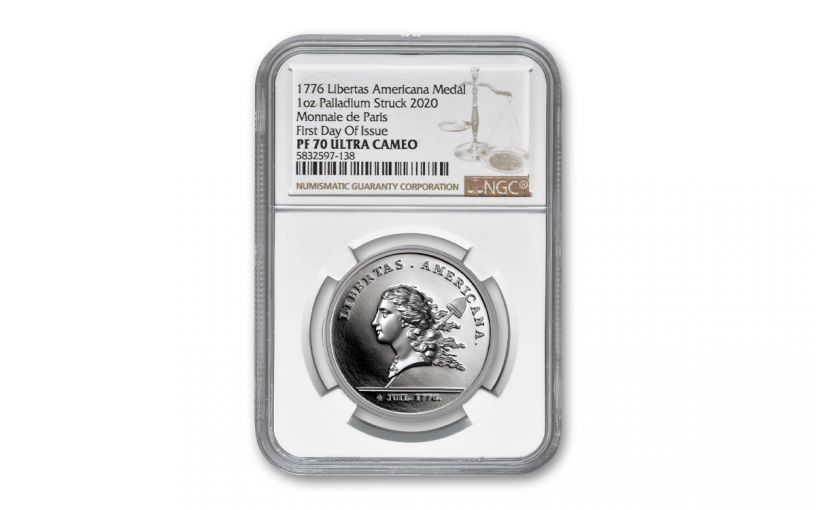 Availability: Call-In Only
This item is only available on a Call-In basis. Please call 1-800-510-6468 to speak to a representative.
Item #
359387
Add to Wish List Add to Wish List Wishlist is for registered customers. Please login or create an account to continue. Add to Compare

The Libertas Americana is the most famous medal in U.S. History. Designed by Benjamin Franklin and struck by the Monnaie de Paris (The Paris Mint) in 1783, it celebrates our victory in the American Revolution. And now, the mint is striking the legendary medal once again, this time in pure palladium – the first time in the history of the Paris Mint, whose timeline dates back to the year 864, that it has ever struck a pure palladium medal!

Each gleaming medal was struck in one ounce of 99.95% palladium and deftly shows all the magnificent detail you would expect from such a time-honored institution as the Paris Mint. In order to create this remarkable striking, the artisans at the Paris Mint descended into the cavernous vaults below the mint and retrieved the original 1783 dies, from which these special proofs were exactly engraved to exhibit the iconic designs rising high off shimmering proof backgrounds.

Founding Father Benjamin Franklin commissioned the Libertas Americana (or “Freedom for America”) Medal to mark the new nation’s victories against the British in the battles of at Saratoga and Yorktown. At the time, Franklin was serving as the United States Minister to France at the court of King Louis XVI and Queen Marie Antoinette, key allies without whose military and naval support against the British, victory may not have been possible. The battles were fought almost exactly four years apart, Saratoga occurring on October 17, 1777 and Yorktown on October 19, 1781. Both dates appear on the coin’s reverse while America’s Independence day of July 4, 1776 appears on the obverse.

Outlined by French artist Esprit-Antoine Gibelin and sculpted by Augustin Dupre, the medal depicts Lady Liberty with her hair flowing in the wind alongside a freedom cap on a pole. The reverse depicts an infant strangling two serpents, a call back to the myth of Hercules that also represents the twin battles of Saratoga and Yorktown. Alongside the child, the goddess Minerva keeps a lion at bay, symbolizing France’s assistance in fighting the British.

Each France One-Ounce Palladium Libertas Americana Medal available here has been graded by the Numismatic Guaranty Corporation (NGC) as being in perfect Proof-70 Ultra Cameo (PF70UC) condition, a distinction that means your perfectly-graded proof will have ZERO imperfections – showing all features and fields exactly as the engraver and mint intended. In addition, NGC has also certified that each medal is a First Day of Issue (FDI) release, meaning they were received by NGC or an NGC-approved depository by the release date or on the business day within 24 hours of the official release date.

Now the bad news: just 500 of these awe-inspiring first-ever One-Ounce Palladium Libertas Americana Proofs will ever be struck. That number is much too low for everyone who would like to add this magnificent piece of numismatic history to their collection. Will you be one of those lucky few? You can be if you reserve one to your cart right now!

The Paris Mint’s first-ever palladium medal is this One-Ounce Palladium Libertas Americana Medal. Just 500 will ever be struck and now you can get one in NGC-graded Proof-70 Ultra Cameo (PF70UC) First Day of Issue (FDI) condition. Order yours today!