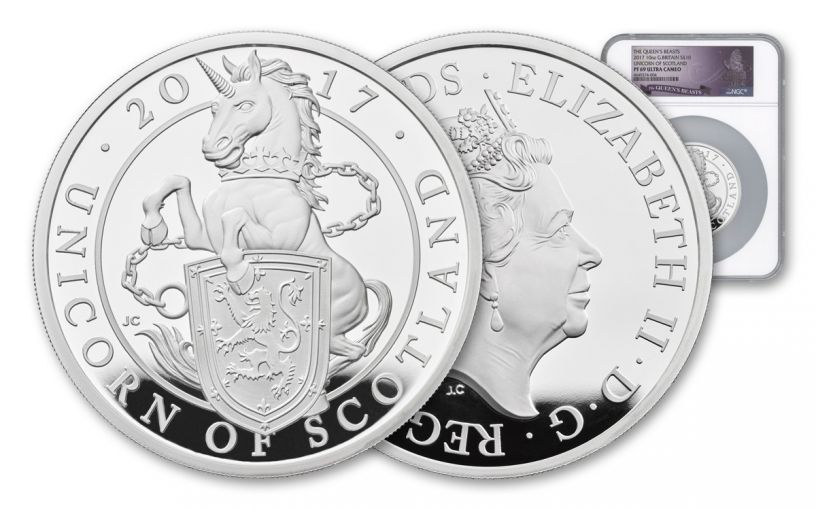 Availability: Call-In Only
This item is only available on a Call-In basis. Please call 1-800-510-6468 to speak to a representative.
Item #
318537
Add to Wish List Add to Wish List Wishlist is for registered customers. Please login or create an account to continue. Add to Compare

To honor these royal protectors and celebrate the reign of Queen Elizabeth II, Great Britain’s Royal Mint has released a series featuring The Queen’s Beasts – ten coins for the ten creatures that stood guard outside her coronation ceremony on June 2, 1953. The second coin in this release is the Unicorn of Scotland, a symbol added to the Coat of Arms by King James I after he united the kingdoms of Scotland and England in 1603. As it is often depicted, the mighty unicorn wears the royal crown around its neck attached to a chain. This is not to show subservience to the crown, but rather to emphasize the power and awesomeness of this particular Queen’s Beast.

The mythical unicorn had been a part of Scottish heraldry since the 1300s. It was this unicorn that James Charles Stuart grew up with as boy in the Scottish court of his mother, Mary Queen of Scots. With his father murdered and his mother imprisoned, James was crowned King James VI of Scotland in 1567 when he was just a year old. When England’s Elizabeth I died in 1603, he was crowned King James I of England, marking the end of the Tudor dynasty and the beginning of the House of Stuart. He unified both kingdoms and the new Coat of Arms reflected the union by depicting the Unicorn of Scotland and the Lion of England both supporting the Royal Arms. The pair have appeared together ever since.

Here’s your chance to bring the Queen’s Beasts Unicorn home in ten full ounces of 99.9% silver, with a reverse designed by the talented Jody Clark, Royal Mint Engraver and designer of the current effigy of Queen Elizabeth II. Your massive coin is 65 mm in diameter and has a legal-tender value of £10 (ten pounds) and has been graded by the Numismatic Guaranty Corporation (NGC) as being in near-perfect Proof-69 Ultra Cameo (PF69UC) condition, a distinction that means your almost-flawless coin will showcase an impressive full strike and indistinguishable imperfections – well above and beyond the quality of the vast majority of coins in the series. It will come sonically sealed in an acrylic holder and encapsulated with an exclusive Queen’s Beasts label.

This wonderful coin and its exciting designs are breathtaking – it’s no wonder each entry of the Queen’s Beasts series has proven incredibly popular. Don’t wait for our supply to disappear, order yours today!

The unicorn’s purity, grace and nobility are legendary. It was chosen as the symbol of Scotland because it was seen as a proud beast that would rather die than be captured. Now you can capture this proud beast – one of Queen Elizabeth II’s ten beasts – in ten ounces of pure silver. Don’t miss out; add this magnificent coin to your cart today!