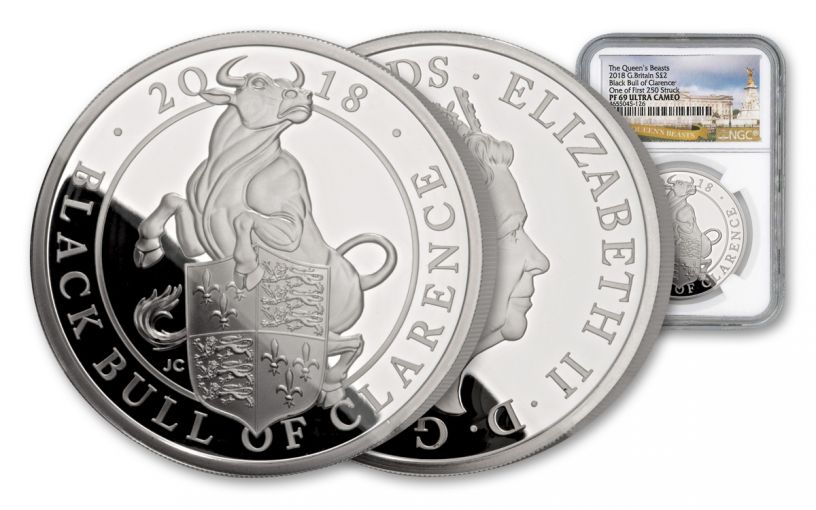 Availability: Out of Stock
This item is currently Out of Stock. Please sign up to be notified if this product becomes available.
Item #
332968
Add to Wish List Add to Wish List Wishlist is for registered customers. Please login or create an account to continue. Add to Compare

This seems like it’s right out of the pages of Harry Potter, but when Great Britain’s Queen Elizabeth II was crowned in 1953, there were actually ten fantastic beasts that guarded the entrance to Westminster Abbey. The Queen’s Beasts, as they were called, were six-foot tall statues designed to represent the rich history and heritage of the monarchy.

To honor these royal protectors and celebrate the reign of Queen Elizabeth, Great Britain’s Royal Mint has released a series featuring The Queen’s Beasts -- ten coins for the ten creatures that stood guard outside her coronation ceremony on June 2, 1953. The fourth coin in this series is the Black Bull of Clarence, a symbol of Edward IV, the first King of England descended from the House of York. Edward reigned from 1461 until 1470 and again from 1471 until 1483. The bull almost seems to charge off the face of the coin and is depicted rearing above the Royal Arms of Edward IV and his brother, Richard III.

This regal coin is struck full ounce of 99.9% silver and bares a legal-tender value of two pounds. It also comes graded by the Numismatic Guaranty Corporation (NGC) as being in near-perfect Proof 769 Ultra Cameo (PF69UC) condition, a distinction that means your almost-flawless coin will showcase an impressive full strike and indistinguishable imperfections – well above and beyond the quality of the vast majority of coins in the series. In addition, NGC has certified this proof as a First Strike (FS) coin, meaning that it was among the first struck by the mint and was verified within the first 30 days of issue.

There’s nothing magical about it. Simply put, these nearly flawless proof specimens and ultra-cameo designs are breathtaking. Order yours now because when the running of these bulls start, they will be gone!