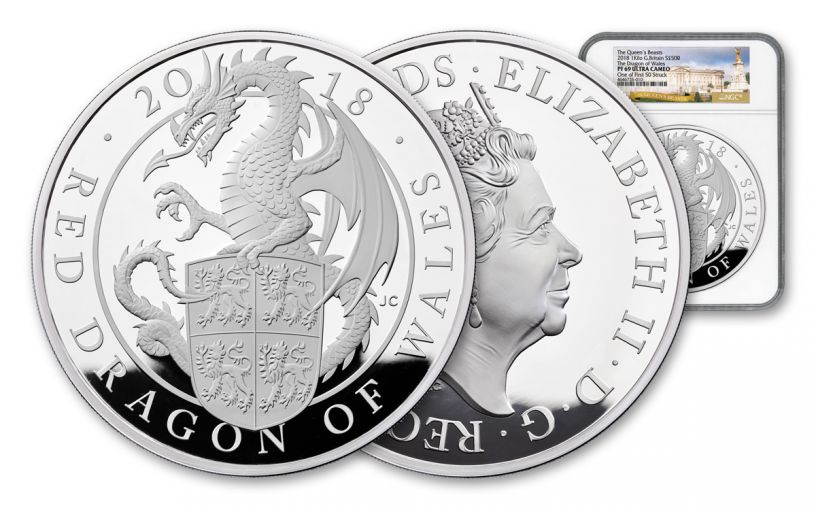 Availability: Call-In Only
This item is only available on a Call-In basis. Please call 1-800-510-6468 to speak to a representative.
Item #
319540
Add to Wish List Add to Wish List Wishlist is for registered customers. Please login or create an account to continue. Add to Compare

Beware the Red Dragon of Wales

When Queen Elizabeth II took the throne, 10 beasts stood in effigy outside of her coronation. These massive “Queen’s Beasts” each represented a part of her royal lineage – and one of the mightiest among them was the Red Dragon of Wales! This mighty creature appears on the Welsh flag, but its history goes back centuries. Even the legendary King Arthur is said to have used it as his battle standard.

This addition to the Queen’s Beasts Proof series displays the Welsh Dragon protecting the shield of Britain. The design comes courtesy of Jody Clark, the same designer who created the most recent effigy of Her Majesty Queen Elizabeth II that graces the coin’s obverse. The Red Dragon of Wales was an emblem of Owen Tudor, a claim to Welsh heritage that was carried on by his son, who would become King Henry VII. The troops of Henry VII carried a fiery red dragon standard at the Battle of Bosworth Field, the final battle in England’s War of the Roses, where Henry representing the House of Lancaster secured the crown of England with a victory over King Richard III and the House of York.

One of just 200 struck, this coin weighs in at a massive full kilo of 99.9% fine silver and comes graded by the Numismatic Guaranty Corporation (NGC) as being in near-perfect Proof-69 Ultra Cameo (PF69UC) condition, a distinction that means your almost-flawless proof will showcase an impressive full strike and indistinguishable imperfections – well above and beyond the quality of the vast majority of coins in the series. In addition, NGC has also certified that it was “One of First 50 Struck.”

With a mintage this small for a coin in this high a grade, we're expecting our dwindling supply of these Red Dragon of Wales Proofs to fly from our vaults in short order. Don’t miss out on your chance to continue the series, start a new collection or just get a great piece of numismatic art – order yours today!

Now you can capture this proud beast – one of Queen Elizabeth II’s ten beasts – in a full kilo of pure silver. Don’t miss out; add this magnificent coin to your cart today!