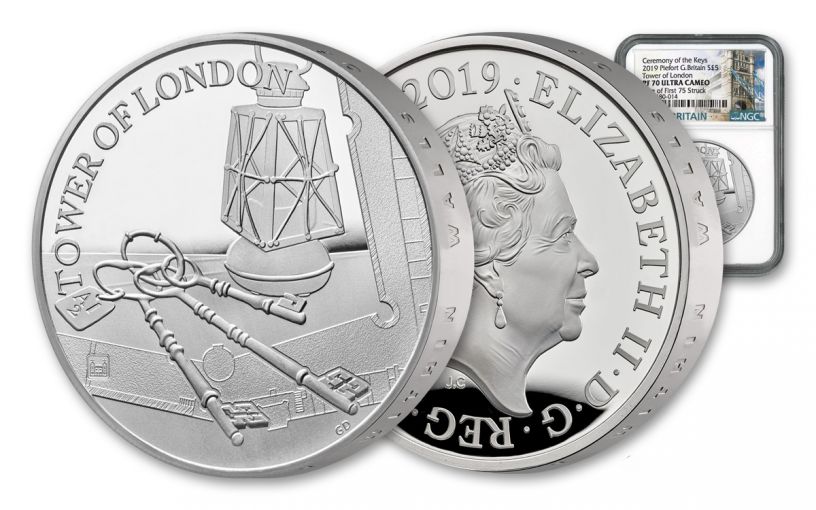 Availability: Call-In Only
This item is only available on a Call-In basis. Please call 1-800-510-6468 to speak to a representative.
Item #
353926
Add to Wish List Add to Wish List Wishlist is for registered customers. Please login or create an account to continue. Add to Compare

This £5 legal-tender coin brilliantly depicts an image of a medieval-looking ring of keys tossed by a keymaster’s lantern. It’s a marvelous design that pays tribute to a tradition that began nearly 700 years ago by a king who was royally upset about the lackadaisical attitude of the guards posted at the Tower of London. Struck in nearly two ounces of 92.5% fine silver, it’s also a double-thick Piedfort Proof that’s twice the weight of a standard £5 coin!

Your 2019 Great Britain £5 Tower of London Ceremony of the Keys Silver Piedfort coin has been graded by the Numismatic Guaranty Corporation (NGC) as being in flawless Proof-70 Ultra Cameo (PF70UC) condition, a distinction that means your perfectly-graded proof will have ZERO imperfections – showing all features and fields exactly as the engraver and mint intended. In addition, NGC has also certified that not only is this proof a First Strike (FS) coin, it further certified that it was “One of First 75 Struck.”

Each coin in this four-piece series is part of a greater whole. When all four coins of the series are arranged together it completes an image of the Tower of London. It’s a fascinating aspect to these coins – but only possible if you secure this fourth and final release while it’s still available! Only 1,160 of these silver piedfort proofs will be struck, so reserve yours now!