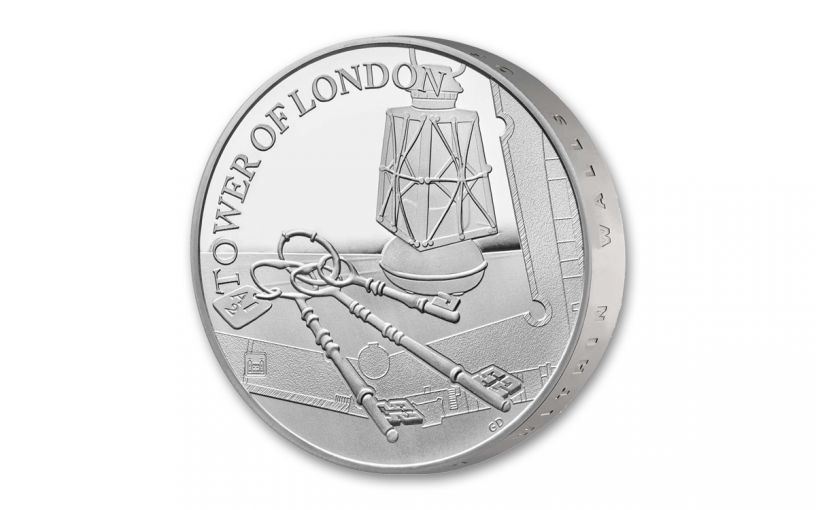 Availability: Out of Stock
This item is currently Out of Stock. Please sign up to be notified if this product becomes available.
Item #
352120
Add to Wish List Add to Wish List Wishlist is for registered customers. Please login or create an account to continue. Add to Compare

This £5 legal-tender coin brilliantly depicts an image of a medieval-looking ring of keys tossed by a keymaster’s lantern. It’s a marvelous design that pays tribute to a tradition that began nearly 700 years ago by a king who was royally upset about the lackadaisical attitude of the guards posted at the Tower of London. Struck in nearly two ounces of 92.5% fine silver, it’s also a double-thick Piedfort Proof that’s twice the weight of a standard £5 coin!

Each coin in this four-piece series is part of a greater whole. When all four coins of the series are arranged together it completes an image of the Tower of London. It’s a fascinating aspect to these coins – but only possible if you secure this fourth and final release while it’s still available!

Your 2019 Great Britain £5 Tower of London Ceremony of the Keys Silver Piedfort Coin comes in gorgeous proof condition, meaning it was expertly crafted by The Royal Mint from hand-selected planchets, polished dies and multiple strikes to produce beautifully frosted details rising over mirror-like fields. In addition, your coin will come beautifully presented in its original government packaging from the mint; a sleek black display box accompanied by an informative booklet. Only 1,160 of these silver piedfort proofs will be struck, so reserve yours now!