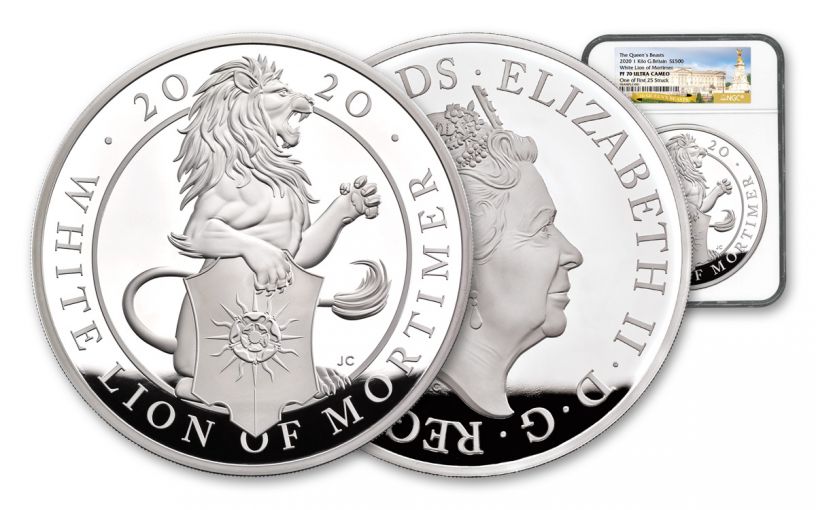 Availability: Call-In Only
This item is only available on a Call-In basis. Please call 1-800-510-6468 to speak to a representative.
Item #
354184
Add to Wish List Add to Wish List Wishlist is for registered customers. Please login or create an account to continue. Add to Compare

The seventh coin in the popular series, this White Lion of Mortimer Proof bears a legal-tender denomination of £500 (five hundred pounds) and is struck in a full kilo of highly pure 99.9% fine silver. The symbolic coin depicts the creature standing on its hind legs behind a shield that displays a white rose encircled by a golden sun. known as a white rose en soleil, this is really a combination of two distinct badges – badges that appear on the Great Seals of both Edward IV and Richard III. It was also used by the future George VI, The Queen’s father, when he was known as Prince Albert the Duke of York. Unlike the Lion of England, the Mortimer lion has no crown and is often depicted with a blue tongue.

Your 2020 Great Britain One-Kilo Silver Queen’s Beasts White Lion of Mortimer Proof has been graded by the Numismatic Guaranty Corporation (NGC) as being in flawless Proof-70 Ultra Cameo (PF70UC) condition, a distinction that means your perfectly-graded proof will have ZERO imperfections – showing all features and fields exactly as the engraver and mint intended. In addition, NGC has certified that your proof is a First Strike (FS) coin, a designation that means it was among the first struck by the mint and was received by NGC or an NGC-approved depository within the first 30 days of its release.

Today, the white lion of Mortimer is prevalent all across Great Britain and can be seen as the emblem and name for many English pubs, hotels, lanes and even shopping centers! This wonderful coin and its exciting designs are breathtaking – it’s no wonder each entry of the Queen’s Beasts series has proven incredibly popular. Between the expected demand by both coin collectors and silver stackers, we don’t expect the low worldwide limited mintage of just 120 to last long. Don’t miss out; reserve this magnificent proof coin for your collection today!