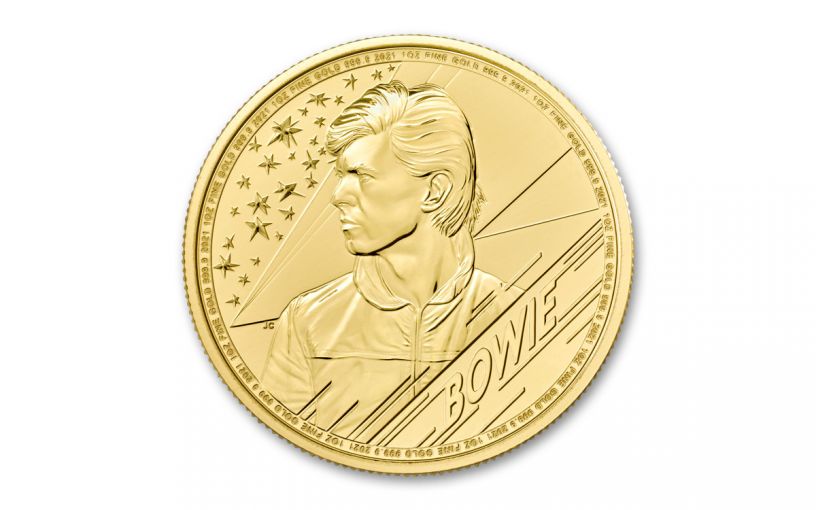 Availability: In Stock
This item will ship within 2 business days.
Item #
408033
CC Payments as low as
$548.75 / month
Add to Wish List Add to Wish List Wishlist is for registered customers. Please login or create an account to continue. Add to Compare

From Ziggy Stardust to the Thin White Duke and Aladdin Sane, David Bowie was pop music’s unmatched master of reinvention. With a spectacular career that dazzled millions of fans with his taste for experiment, Bowie was Rock music’s greatest chameleon, a generations-spanning superstar who had the ability to adapt himself to the changes in the music scene from the 1970s into the 21st century. Without a doubt, Bowie was one of music’s most influential icons, and now he’s featured on a legal-tender coin from Great Britain’s prestigious Royal Mint.

An Iconic Portrait of the Great David Bowie

Struck in a full ounce of highly pure 99.9% gold, the legal-tender £100 (one hundred pounds) coin is the work of acclaimed artist Jody Clark, who said he was inspired Bowie’s persona from the late 1970s period when he lived and recorded in Berlin. This was Bowie’s famous “Aladdin Sane” persona, a clever play on words meaning “a lad insane,” a symbolic moniker that announced to the world that Bowie was keeping himself from getting too sucked up into his own mind. This character was Bowie’s take on stepping back a bit and grounding himself. This one-ounce gold release also incorporates elements of color and is the only coin in the David Bowie series to do so.

In addition, this 2020-dated Great Britain One-Ounce Gold Legends of Music: David Bowie Coin comes in original Brilliant Uncirculated (BU) condition with razor-sharp details and details that are as fresh and crisp as they it left the mint. The design really does justice to the legacy and influence of David Bowie.

A Perfect Gift for Any Bowie Fan

Born David Robert Jones in 1947, David Bowie was one of the most influential personalities in pop music. Singer, songwriter and actor, Bowie’s music ranged from Glitter and Glam rock to electronica, rock and pure pop. Famous for his Ziggy Stardust persona, he also sang a duet with Bing Crosby during a televised Christmas special that has been hailed as one the weirdest yet most successful duets in Christmas music history! A respected actor, Bowie also won acclaim for his work in such films as “The Man Who Fell to Earth” and “The Hunger.” He died unexpectedly in 2016 from liver cancer, an affliction he had kept secret from all but a few close friends and associates.

The perfect gift for any fan of David Bowie, this coin is sure to be hit. But with a maximum worldwide edition limit of just 2,500 coins, there’s no doubt that these coins will be one of our top sellers. We expect our supply to vanish quickly; so, don’t wait, click one of these David Bowie coins to your cart right now!

Pay tribute to the legacy of one of the world’s greatest music artists with the 2020 Great Britain One-Ounce Gold Legends of Music: David Bowie Coin. It also makes a wonderful and thoughtful gift!