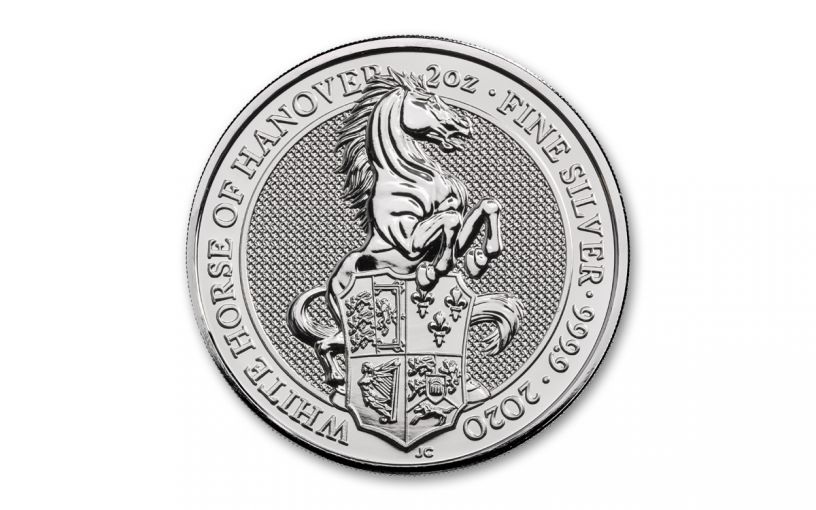 Availability: In Stock
This item will ship within 2 business days.
Item #
361091

All Hail the Silver White Horse of Hanover!

The ninth coin in the popular bullion version of the series, this White Horse of Hanover coin bears a legal-tender denomination of £5 (five pounds) and is struck in two ounces of 99.99% pure silver. The symbolic coin depicts the majestic equine triumphantly rearing over a shield as if in a full gallop. The powerful stallion is depicted with the Royal Arms of George I, which includes three quarters that represent his sovereignty as King of Great Britain, France and Ireland while the fourth has the arms of Hanover. Plus, each 2020 Great Britain Two-Ounce Silver Queen’s Beasts White Horse of Hanover Coin available in this offer will come in beautiful Brilliant Uncirculated (BU) condition with razor-sharp details that are as fresh and crisp as the day it left the mint.

The White Horse of Hanover appeared on the Royal Coat of Arms through the reigns of Georges I, II and II. When Queen Victoria ascended to the throne it ended the personal union between the United Kingdom and Hanover and the horse was removed. This wonderful coin revives that exciting herald in a breathtaking way that is the equal to each entry in the incredibly popular Queen’s Beasts series that has come before it. Between the expected demand by both coin collectors and silver stackers, we don’t expect our supply to last long. Don’t miss out; reserve this magnificent coin for your collection today!

STRUCK IN HIGHLY PURE SILVER – Each of these Queen’s Beasts White Horse of Hanover Coins are struck in two ounces of 99.99% pure silver and measure 38.61 mm in diameter.

GLEAMING UNCIRCULATED CONDITION – Your 2020 Great Britain Two-Ounce Silver Queen’s Beasts White Horse of Hanover Coin will come in Brilliant Uncirculated (BU) condition, as fresh and crisp as the day it left the mint.