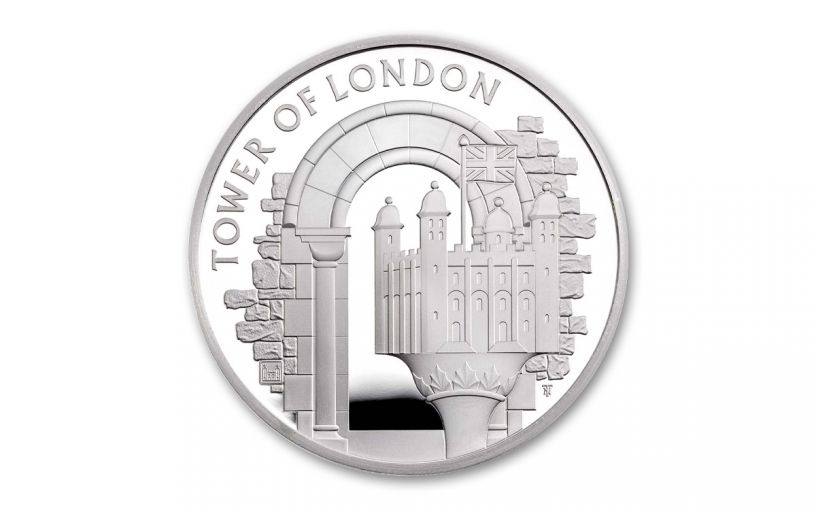 Availability: In Stock
This item will ship within 2 business days.
Item #
361179
Add to Wish List Add to Wish List Wishlist is for registered customers. Please login or create an account to continue. Add to Compare

When digging into the history of England’s famous Tower of London, one must start with William the Conqueror, the first Norman king of England. After he claimed the crown following his victory at the Battle of Hastings in 1066, William turned his attention to cementing his hold on power. That meant securing London, England’s most powerful city. It was there on the site of an old Roman city wall that he began construction of a great stone tower known today as the White Tower.

Now William’s iconic White Tower, one of the most famous castles in the world, is featured on the first coin in Great Britain’s 2020 Tower of London Collection. The series, which began in 2019, continues in 2020 with four new designs. Built to protect and control London, the White Tower — also known as “The Old Keep” — was an imposing fortress-stronghold that embodied William’s power and was meant to impress as well as intimidate citizens and visitors alike. The centuries-old structure is shown on the coin framed by a distinctive arched Norman window.

Each legal-tender £5 coin available in this offer was struck in 28.28 grams of gleaming 92.5% Sterling silver and comes in gorgeous Proof condition, meaning they were expertly crafted by the mint from hand-selected planchets, polished dies and multiple strikes to produce beautifully frosted details rising over mirror-like fields. It’s an impressive coin that’s worthy of an exalted position in any collection. Plus, these coins also feature an exclusive Royal Mint Tower-of-London mint mark that appears only on the coins in this series.

Your 2020 Great Britain £5 Silver Tower of London White Tower Proof will come in its original government packaging consisting of a beautiful Royal Mint-branded presentation case. With a maximum worldwide limited edition of just 2,510, you’ll need to act fast before these coins all disappear. Start or add to your collection of Tower of London coins with the White Tower. Click it to your cart today!

FIRST COIN OF NEW TOWER OF LONDON SERIES – This coin is the first release in Great Britain’s 2020 Tower of London collection. It features William the Conqueror’s White Tower, which today houses the Royal Armouries collection. The coin’s obverse displays the portrait of Queen Elizabeth II.

INCLUDES EXCLUSIVE MINT MARK – These coins feature an exclusive Royal Mint Tower-of-London mint mark that appears only on coins in this series.

LOW LIMITED EDITION – The maximum limited edition for this coin has been set at just 2,510.

The first coin in Great Britain’s 2020 Tower of London series begins with this beautiful silver proof that pays tribute to William the Conqueror’s White Tower. Secure yours now!