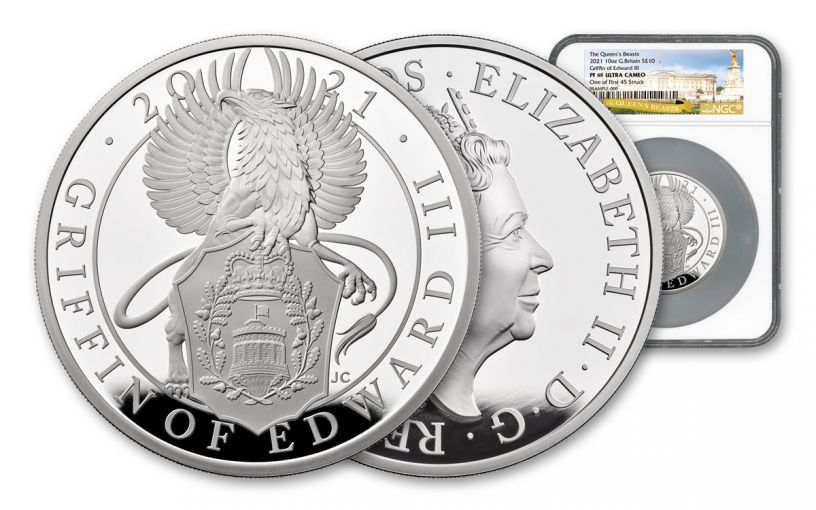 Availability: Call-In Only
This item is only available on a Call-In basis. Please call 1-800-510-6468 to speak to a representative.
Item #
408897
Add to Wish List Add to Wish List Wishlist is for registered customers. Please login or create an account to continue. Add to Compare
Recommended Products
Product Description

Bring Home the Griffin of Edward III — The Final Release in the Queen’s Beasts Series!

When Her Majesty Queen Elizabeth II received her crown on June 2, 1953, ten symbolic creatures, each representing a part of her centuries-long royal lineage, stood guard outside the coronation ceremony at Westminster Abbey. One of those six-foot-tall sculptures standing in silent deference was the Griffin of Edward III, an honorable creature that is also the tenth — and final — proof release in The Royal Mint’s Queen’s Beasts series.

This Griffin of Edward III coin bears a legal-tender denomination of £10 (five hundred pounds) and is struck in ten ounces of highly pure 99.9% fine silver. The symbolic coin depicts the powerful half-eagle, half-lion beast standing over a Windsor Castle shield. The shield’s badge shows the Round Tower of Windsor Castle with the Royal Standard flying from the turrets surrounded by two branches of oak and the royal crown.

The use of the Griffin in Royal Heraldry dates back to Edward III, who reigned from 1327 to 1377. One of the most powerful kings in medieval times, Edward built England’s military into one of Europe’s most formidable forces. Along with his son, the famous Black Prince, Edward led England into the 100 Years War with France and thoroughly routed the French army at the decisive Battle of Crécy in 1346 that resulted in an English foothold in France that lasted for more than 200 years. Edward, who was known to have had many items embroidered with griffins — including his signet seal — elevated the Griffin to royal status. The Griffin is the mythological guardian of sacred objects and a protector against evil. As the founder of the Order of the Garter at Windsor Castle, Edward III’s Griffin forms the centerpiece of the modern-day House of Windsor’s badge.

This wonderful coin revives that exciting herald in a breathtaking way that is the equal to each entry in the incredibly popular Queen’s Beasts series that has come before it. Plus, each 2021 Great Britain Ten-Ounce Silver Queen’s Beasts Griffin of Edward III Proof available in this offer has been graded by the Numismatic Guaranty Corporation (NGC) in near-perfect Proof-69 Ultra Cameo (PF69UC) condition, a distinction that means your almost-flawless coin will showcase an impressive full strike and indistinguishable imperfections — well above and beyond the quality of the vast majority of coins in the series. In fact, NGC has further certified that this coin is from among the first 35 struck!

You coin has also been sonically sealed in an acrylic holder with a Queen’s Beasts label that attests to it being one of the first 35 struck. It will be accompanied by a numbered Certificate of Authenticity from The Royal Mint along with a storybook about the history of The Queen’s Beasts. These releases often completely sell out, so don’t wait for there to be an unfillable hole in your collection. Secure your Griffin of Edward III Proof now!

Part lion, part eagle, the Griffin of Edward III is here — but only for so long! Reserve yours now by simply clicking it to your cart!