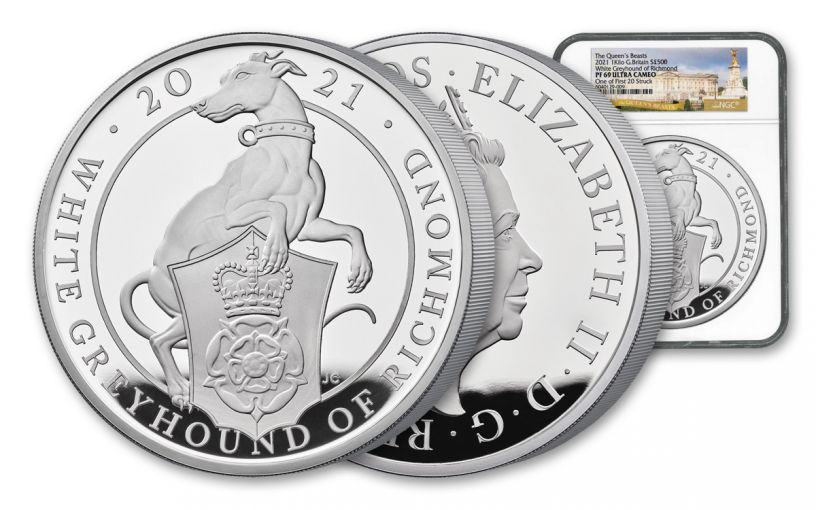 Availability: Call-In Only
This item is only available on a Call-In basis. Please call 1-800-510-6468 to speak to a representative.
Item #
367009
Add to Wish List Add to Wish List Wishlist is for registered customers. Please login or create an account to continue. Add to Compare
Recommended Products
Product Description

The ninth release in the popular series, this White Greyhound of Richmond coin bears a legal-tender denomination of £500 (five hundred pounds) and is struck in a full kilo of highly pure 99.9% fine silver. The symbolic coin depicts the popular canine prancing over a Tudor shield. The shield’s badge, or “livery,” shows a Tudor Rose below a Royal Crown.

This wonderful coin revives that exciting herald in a breathtaking way that is the equal to each entry in the incredibly popular Queen’s Beasts series that has come before it. Plus, each 2021 Great Britain One-Kilo Silver Queen’s Beasts White Greyhound of Richmond Coin available in this offer has been graded by the Numismatic Guaranty Corporation (NGC) as being in near-perfect Proof-69 Ultra Cameo (PF69UC) condition, a distinction that means these almost-flawless coins showcase impressive full strikes and indistinguishable imperfections — well above and beyond the quality of the vast majority of coins in the series.

In addition, NGC has further certified that that this coin is “One of First 20 Struck.” Collectors seek out these coins because they are produced with new dies and are considered to have sharper strikes and deeper mirrors than those that are struck later. Also, the population of coins labeled “First Struck” is only a fraction of the total mintage. Plus, each coin will come beautifully housed in presentation case and accompanied by a number Certificate of Authenticity from The Royal Minty along with a booklet that details the history of The Queen’s Beasts.