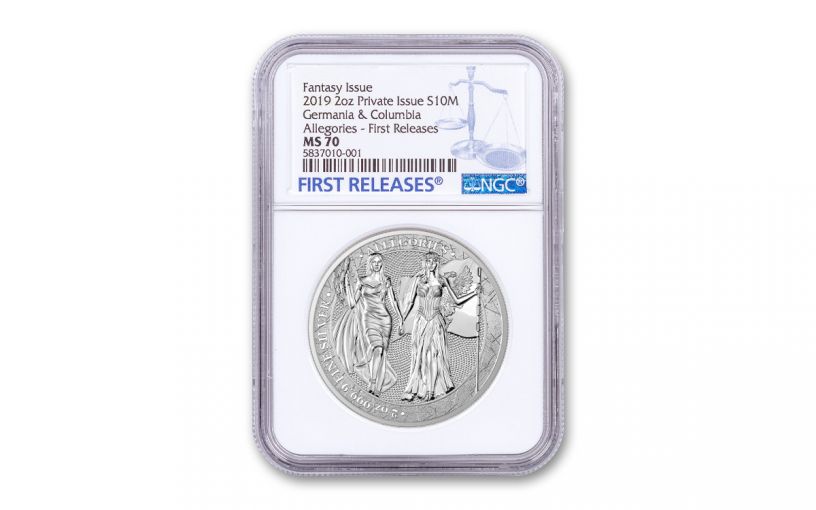 Availability: In Stock
This item will ship within 2 business days.
Item #
358458
CC Payments as low as
$99.50 / month
Add to Wish List Add to Wish List Wishlist is for registered customers. Please login or create an account to continue. Add to Compare

Germania and Columbia Are Dressed To Kill On New Allegories Release

The Germania Mint’s series featuring its namesake Germania – Germany’s female personification that’s similar to our Liberty or Great Britain’s Britannia – was released in low mintages and sold out at lightning speed. Now, the next beautifully designed medal is here – and this time she’s united with an American Goddess!

The second release in the Germania Mint’s “Allegories” Series, this gorgeous piece not only features a youthful and vibrant Germania fitted in a warrior bodice, but it shows her walking hand in hand with Columbia, the female personification of the United States and of Liberty herself. Usually portrayed in flowing Grecian robes, THIS Columbia is depicted wearing a chic form-fitting off-the-shoulder evening gown. Both Columbia and Germania hold their nation’s flags as they boldly stride forward together.

Struck in two ounces of highly pure 99.99% fine silver, it’s a truly beautiful representation of the two nation’s shared ideals of democracy and cooperation. Close allies since the end of World War II, the United States played a leading role in rebuilding Germany after the Second World War, providing billions of dollars in aid. Though the two nations disagree on some policy issues, they are united in anti-communism ideals and are strong trading partners.

This gorgeous silver dollar-sized medal is an absolute must-have for any fan of Germania, Columbia or beautiful numismatic medals in general. Each 2019 Two-Ounce Silver Allegories Medal available here has been graded by the Numismatic Guaranty Corporation as being in flawless Mint State-70 (MS70) condition, a distinction that means your perfectly-graded medal will have ZERO imperfections – showing all features and fields exactly as the engraver and mint intended. In addition, NGC has certified these pieces to be First Releases (FR) issues, a designation that means they were received by NGC or an NGC-approved depository within the first 30 days of their release.

Just 2,500 of these exquisite two-ounce silver medals will be struck for the entire world so click one to your cart today before they vanish into the hands of other eager collectors!

UPDATED ALLEGORIES OF THE UNITED STATES AND GERMANY – The female personifications of the United States and Germany – Columbia and Germania – take center stage on this silver medal. The reverse features the Germania Mint’s Coat of Arms and a ceremonial 10-Mark denomination – an aesthetic design element as this round is not legal tender.

STRUCK IN HIGHLY PURE SILVER – Each 2019 Silver Allegories Medal was struck by the Germania Mint in two ounces of highly pure 99.99% fine silver and measures 38.61 mm in diameter.

KEY FIRST RELEASES CERTIFICATION – NGC has certified your medal to be a First Releases (FR) issue, meaning that it was among the first struck by the mint and was verified within the first 30 days of issue.

LIMITED-EDITION MINTAGE – The maximum worldwide mintage for this medal has been set at 2,500.

The beauty and grace of Columbia and Germania grace this 2019 Two-Ounce Silver Allegories Medal – the second release in this exciting series. Get yours now!