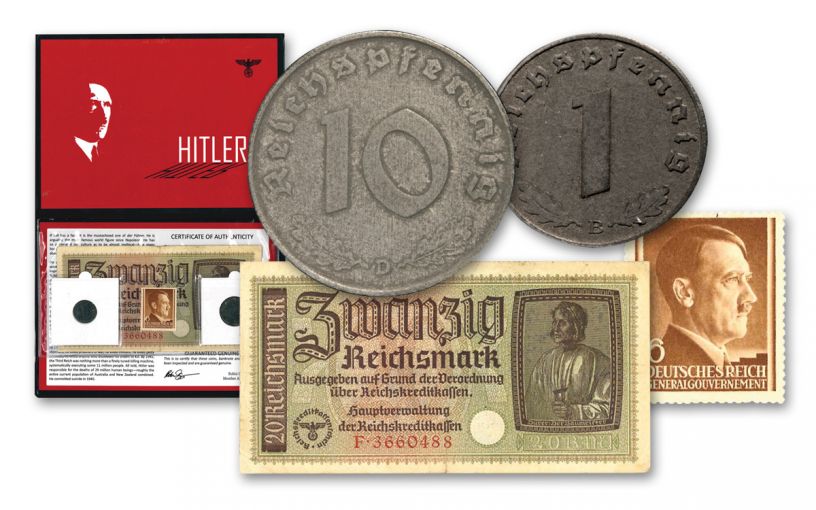 Availability: In Stock
This item will ship within 2 business days.
Item #
409784
Add to Wish List Add to Wish List Wishlist is for registered customers. Please login or create an account to continue. Add to Compare
Recommended Products
Product Description

Adolf Hitler was one of, if not the most notorious men in world history. His name immediately conjures up images of war, death, and the infamous Nazi swastika emblazoned on the armbands of goose-stepping Stormtroopers. But that dreaded symbol was also found in other places throughout Germany during Hitler’s reign of evil. One such place was on the coins and currency of Nazi Germany. Now, more than 75 years after the defeat of Nazi Germany in World War II, here is a historic collection consisting of two zinc Nazi coins, a bank note used by the Third Reich in occupied territories, and a stamp featuring a portrait of der Fuhrer, Adolph Hitler.

German currency from World War II is highly coveted by coin collectors and history buff alike. Because Nazi Germany and everything associated with it was so despised following World War II, many coin and currency pieces were destroyed, thus making them scarce and hard to find today. Each piece in this collection is an authentic artifact from the Second World War and the set comes housed in a black wallet-type holder with a deluxe information card. It’s perfect for coin and history buffs of all ages!