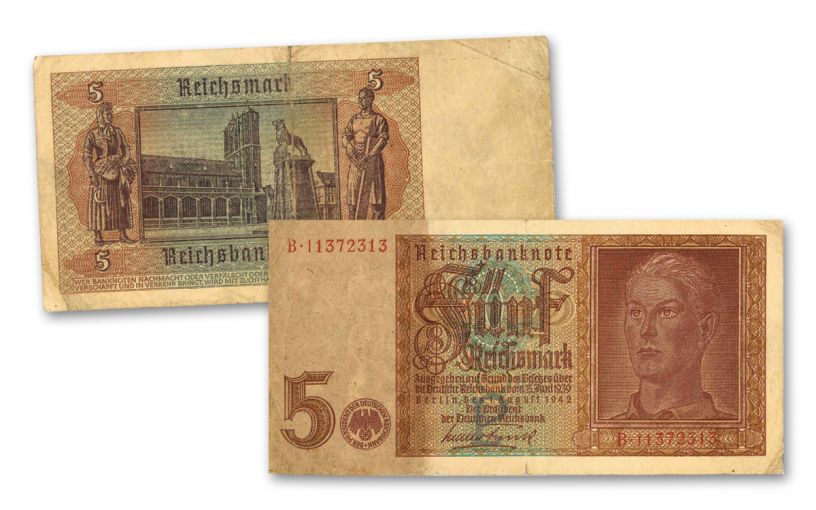 Availability: In Stock
This item will ship within 2 business days.
Item #
409722
Add to Wish List Add to Wish List Wishlist is for registered customers. Please login or create an account to continue. Add to Compare
Recommended Products
Product Description

Adolph Hitler, one of the most notorious men in world history. As der Führer — the Leader — of Nazi Germany, he grabbed power in 1933 when he became chancellor of Germany. From then on, he ruled as absolute dictator until his suicide in 1945. His name immediately conjures up images of war, death and the infamous Nazi swastika emblazoned on the arms of goose-stepping Stormtroopers. Now, more than 75 years after the defeat of Nazi Germany in World War II, you can own this historic paper currency note from that the era.

This 1942 5 Reichsmark was introduced to replace the 5 Reichsmark silver coins that were disappearing due to hoarding. In a chilling omen of things to come, it features the same blonde-haired and blue-eyed Aryan youth who had earlier appeared on Hitler Youth posters that encouraged young people to join the youth organization of the Nazi Party. A small Swastika logo appears at the left. The back of the note’s shows the Cathedral and Lion Statue of Brunswick, Hitler's adopted hometown and the first city where the Nazis won wide support. Male and female farmers appear on either side. Each note here will come in Good to Very Fine (G–VF) condition. Quantities are limited so secure yours now!