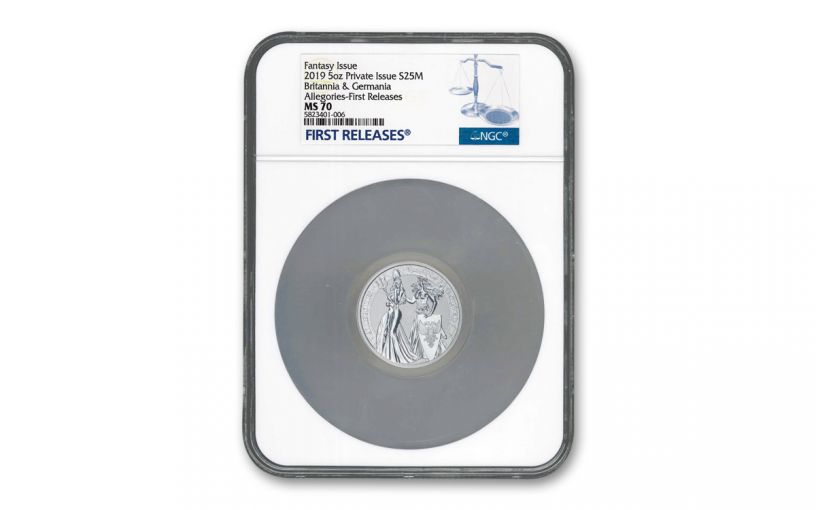 Availability: Out of Stock
This item is currently Out of Stock. Please sign up to be notified if this product becomes available.
Item #
353000
Add to Wish List Add to Wish List Wishlist is for registered customers. Please login or create an account to continue. Add to Compare

The Germania Mint’s series featuring its namesake Germania – Germany’s female personification similar to our Liberty or Great Britain’s Britannia – was released in low mintages and sold out at lightning speed. Now, the next beautifully designed medal is here, and just 500 of these five-ounce pieces were struck!

What’s more, this new medal is the first issue of an all-new series called “Allegories.” This gorgeous piece not only features a youthful and vibrant Germania, but it shows her standing beside Britain’s Britannia depicted as a chic young lady ready to conquer the hearts of men as easily as she conquers the enemies of her country. Struck in five full ounces of highly pure 99.99% fine silver, it’s a truly beautiful representation of the two nation’s long history of cooperation.

Your 2019 Five-Ounce Silver Allegories Medal has been graded by the Numismatic Guaranty Corporation (NGC) as being in perfect Mint State-70 (MS70) condition, a distinction that means your perfectly-graded medal will have ZERO imperfections – showing all features and fields exactly as the engraver and mint intended. In addition, NGC has graded your medal to be a First Releases (FR) issue, a designation that means your medal was received by NGC or an NGC-approved depository within the first 30 days of its release. Collectors seek out pieces certified this way because they are produced with new dies and considered to have sharper strikes and deeper mirrors than those that are struck later.

The beauty and grace of Britannia and Germania grace this 2019 Five-Once Silver Allegories Medal – the first release in a new series. Get yours now!